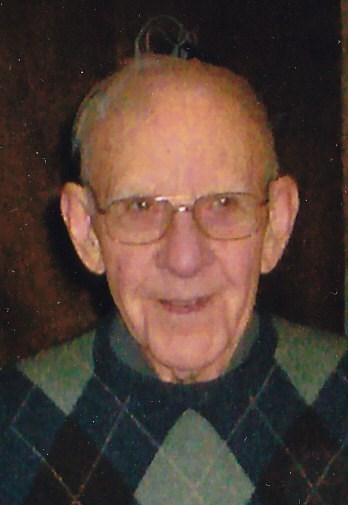 Forrest E. Darr of Coshocton died on Wednesday, April 24, 2019 in the emergency room of Coshocton Regional Medical Center. He was born on July 25, 1923 to Joseph and Ethel (Mullet) Darr. Forrest was a resident of Altercare of Coshocton after living many years at Riverside Towers.

Along with his parents and wife, he was preceded in death by three brothers, Adrian, Clarence, and Dennis Darr; one sister and brother-in-law, Leota (Lew) Ostler, and special friend Martie Carpenter. Forrest graduated from Roscoe High School in 1940. He served in the U.S. Navy during WWII and was a proud veteran. Following his military service, he delivered milk for Meadow Gold Diary for many years and then joined Audrey in owning and operating Darr Designed Interiors. After “retirement”, he operated his own lawn service.

Forrest was affiliated with several churches over the years including Grace United Methodist Church, Branch United Methodist Church, Calvary Baptist Church and most recently Pleasant Hill Baptist Church. Forrest’s passion in life was visiting friends and family. He spent hours visiting patients in nursing homes and was always dropping in to check on or take care of friends in the community. It was a true ministry.

Calling hours will be held on Tuesday, April 30, 2019 from 6:00 pm to 8:00 pm at Given-Dawson-Paisley Funeral Home. Funeral services will be held on Wednesday, May 1, 2019 at 1:00 pm at the funeral home with Pastor Dan Swanson officiating. Burial will follow at Roscoe Cemetery where military honors will be conducted by the Coshocton County Veterans Council Honor Guard.

In lieu of flowers memorial contributions may be made to MMS Aviation, P.O. Box 1118 Coshocton, Ohio 43812.

An online memorial can be viewed at www.given-dawson-paisleyfh.com.

In Memory Of Forrest Edward Darr