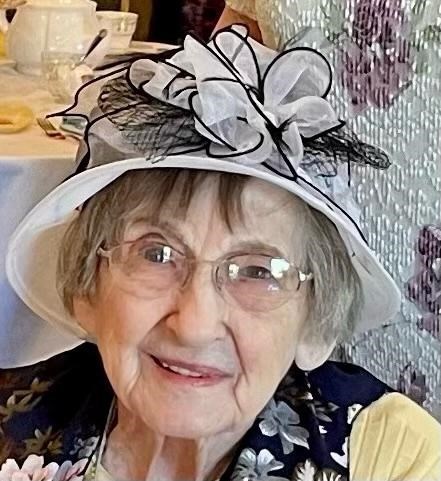 Velma Pauline Hoffman, of Coshocton, Ohio, passed away at the age of 100 on Friday, January 20, 2023. She was born on May 9, 1922, near Isleta, Ohio, to the late Russell D. Hart and Emma H. (Zimmerman) Hart. As a grade school student, she attended a one room school (Center Valley) and later West Lafayette High School, class of 1940. Velma was preceded in death by her husband Charles L. Hoffman, her son Cletus D. Hoffman, and her brothers Russell W. Hart and Cletus D. Hart. Velma was a member of the National Society of the Daughters of the American Revolution. She was proud that her two brothers, a son and a grandson had served in the Navy. Her love for God was evident in the ways she served in various capacities at The Presbyterian Church of Coshocton where she was a member. Velma was passionate about quilting. She made beautiful quilts for her children, grandchildren and great-grandchildren. She also was passionate about improving lives both here and in other countries. She made hundreds of hospice gowns for Community Hospice and hundreds of sundresses from pillowcases, which were distributed to girls throughout Africa. Velma is survived by four of her five children: Carl (Diane) Hoffman (VA), Carolyn (Jim) Stitt (IN), Jean (Larry) Infield (Coshocton) and Polly (Terry) Stimmel (SC), and by her daughter in law, Betty (Cletus) Hoffman (Coshocton). She is also survived by seven grandchildren, Steve Hoffman (TX), Dr. Karen Hoffman (TX), Robin McElfresh (IN), Christopher McElfresh (WI), Angela Harper (OH), Charles Hoffman (GA), and Troy Patterson (TX), eleven great-grandchildren and several nieces and nephews. Funeral services will be held at The Presbyterian Church, 142 N 4th Street, Coshocton, Ohio on Friday, January 27, 2023 at 11:00am. Following the funeral service, the family will greet friends from 12:00 to 2:00pm in the Parlor of the Church. A private burial will follow later in the day on Friday at Fairfield Cemetery. Given-Dawson-Paisley Funeral Home is serving the family. For those who wish, memorial contributions may be made in Velma’s name to The Presbyterian Church, 142 N 4th Street, Coshocton, OH 43812 or to Community Hospice, 230 S 4th Street, Coshocton, OH 43812. An online memorial can be viewed at www.given-dawson-paisleyfh.com.
See more See Less

In Memory Of Velma Pauline Hoffman