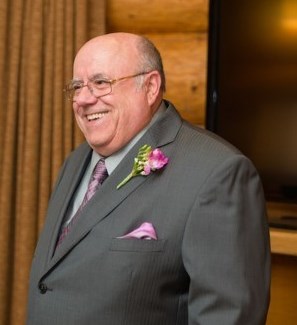 It is with great sadness that the family of Barrie Doubleday announce his sudden passing. Barrie was born in 1946 in Melton Mowbray, England and came over to Canada with his family on the RMS Aquitania at 18 months old. He grew up on a farm in Surrey, BC until he joined the Navy at age 17. He is predeceased by his loving wife of almost 50 years, Ellen Henderson Doubleday who lost her battle with cancer only 11 months ago. After they got married in 1974, he remustered into the Canadian Airforce as a flight engineer where he served almost 30 years. Moving around to various bases in his career they decided to retire at their final posting in Comox, BC. Barrie had a passion for gardening and knew everything about flowers and plants. He loved to putter outside and create an oasis in every backyard he had. He also took up the hobby of genealogy, researching back hundreds of years on his family tree. In doing so he was able to connect with distant relatives all around the world. He is survived by his son Kyle & wife Amanda Doubleday in St. Catharines, ON, Daughter Cindy & husband Kevin O’Neill in Comox, BC. Granddaughters Delaney Doubleday (Tyler Christink), Isla & Miranda O’Neill, Grandson Ryan Doubleday (Megan Williamson), and Great Grandson Benjamin Doubleday. Siblings Sandra Bruce (Jim), Roger Doubleday, Colleen Salo (Dan Ostroski), Chris Doubleday, Gralin Doubleday (Betty), and many nieces, nephews, cousins, and many extended relatives worldwide. Our Dad was such a joyful and chatty person who loved spending time with his grandchildren and being out in nature. He will be greatly missed by his cat Willow and all of his family & friends. As per his wishes we will have a small family service when the weather warms up. His ashes will be interred at the Courtenay Civic Cemetery beside the love of his life.
See more See Less

In Memory Of Barrie Ian Doubleday