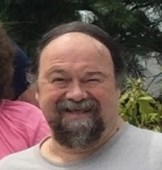 Edward Lee Maxwell, 58, of Cross Lanes went home to be with the Lord on August 7, 2020. Edward was born in Anapolis, Goiz Brazil to Jack and Elizabeth Maxwell. He grew up in Highland County, VA. He earned degrees from Montreat Anderson College, Presbyterian College, and WVSU. He was an active member at Perrow Presbyterian where he helped in the children’s ministry, was a deacon, and helped with the sound ministry. He went on mission trips to Medellin Columbia to help spread the gospel. Edward was an avid Dallas Cowboys and Cincinnati Reds fan even in their lean years. He loved hunting and fishing and being outdoors. He enjoyed watching all kinds of sports. Edward was a jokester and enjoyed teasing his friends, He could often be found with his friends laughing and telling stories and enjoying the company of others. Even though the last few years were hard healthwise he never lost his love for Jesus and trusted him to the end. Edward was preceded in death by his mother, Elizabeth W. Maxwell. He is survived by his father Jack E. Maxwell and sister Elizabeth L. Maxwell both from Cross Lanes, WV, and his sister Priscilla Maxwell of Montreat, NC. Services will be held at Perrow Presbyterian Church on Tuesday August 11, 2020 at 1:00 with visitation beginning at 12:00. Tyler Mountain Funeral Home is assisting the family. Online condolences can be made by visiting tylermountainfuneralhome.com. In Lieu of flowers the family is asking that donations be made to Open Arms Foundation in Medellin Columbia in his name. Donations can be sent to Perrow Presbyterian Church 5345 Big Tyler Rd, Cross lanes, WV 25313.
See more See Less

In Memory Of Edward Lee Maxwell