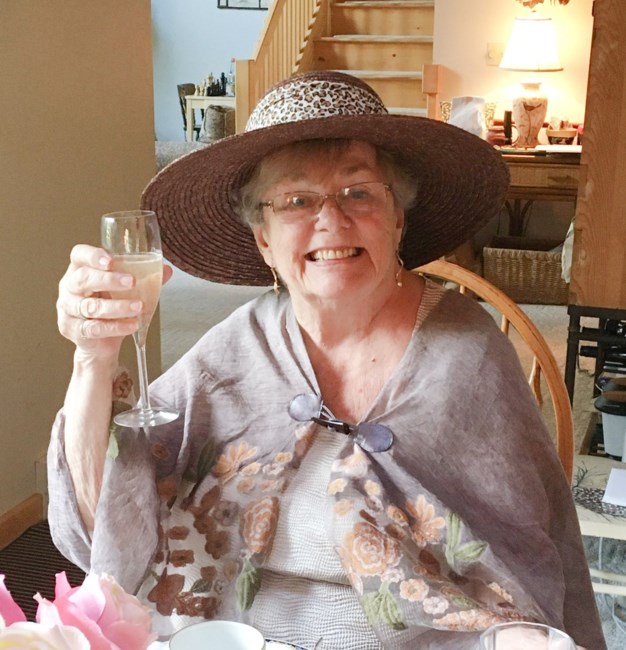 Arlene Mildred (Gardner) Wendt passed away on July 11, 2022, surrounded by family and long-time friends. She was 82. Arlene was born on May 9, 1940 in Yonkers, NY. She attended Longfellow Elementary School and graduated in 1958 from Gorton High School. In high school, Arlene was a talented student and natural leader, as her activities attest: newspaper club, student council, school choir, the Gorton Players, and President of homeroom 105. She met fellow Gorton student and husband of 49 years, Ernest P. Wendt, on a double date. Arlene married Ernie at age 18, had her first daughter, Sally, at age 19 and second daughter, Janice, 2 years later; and then Nora arrived 7 years later when Arlene was 29. Although she received scholarships to college, Arlene went to work as a factory secretary to bring money into the household. She also worked second shift for the telephone company and created floral arrangements in a local florist before landing a job at IBM. Arlene began her IBM career as an executive secretary in the Americas/Far East division and eventually became a communications specialist at IBM headquarters, promoting the company’s corporate sponsorship for television productions. Arlene retired from IBM in 1995. Arlene’s career as a performer began before most kids learn to read. She started ballet and tap lessons at age three and made her stage debut at the USO at age four. She wrote radio plays and full-length stage scripts in her early teens (including one about atomic energy). In high school, Arlene studied acting with Mildred Streeter in Ms. Streeter’s Coal Bunker Theatre at Gorton High School. Arlene describes Ms. Streeter this way: “She was tough, she was thorough, she had the nerve to take artistic chances, and she didn’t skimp on details.” Arlene clearly followed her mentor’s example. At age 23, she auditioned for and was accepted to study with Robert Lewis – legendary founder of The Actors Studio. Arlene completed the course…and then went right back and took the course again. Her first community theatre home was the St. Mary’s Players in St. Mary’s Church in Yonkers. For over 12 years, Arlene directed and/or acted in over two dozen St. Mary’s productions. In 1975, with $1,000 and the support of her husband and several close friends, she founded her own theatre company – Actors Conservatory Theatre. She collected the best talent she had seen or worked with and brought them together in ACT’s first production: Twelve Angry Men, which won first place in lower New York State Theatre Association’s annual drama contest. The production went on to the statewide finals to win second place, along with Best Performer and Best Supporting Performer. During ACT’s early years, Arlene also directed plays for the IBM Players, where she met several future key supporters of ACT, including the late Cary Bair, with whom Arlene co-wrote and staged two full-length musicals – Castlelot and Cycles. Arlene also created ACT’s Falling Rock Zone Improv Troupe and its Merry Murders fundraising company. In recent years, she developed ACT Presents….., which offers the opportunity for new material to be “workshopped” with actors, the writer, and the audience. Throughout her theatrical career, Arlene directed over 100 mainstage productions and conducted over 30 acting and scene study workshops. Her most recent workshop resulted in Monologue Moments, which was rehearsed and presented in an all-virtual format during the 2020-21 pandemic. In addition to her own achievements in the theater, Arlene is credited with launching the careers of dozens of professional actors and theater technicians. Through her work as President of ACT, Arlene contributed to scholarships to students in the arts, established a platform for original works, offered affordable access to high quality theater for the community, and has kept the theater company on firm financial footing for nearly half a century. She was the recipient of the first Annual Cab Calloway Award for Lifetime Achievement in the Arts in Westchester, and received the “Performing Arts Trailblazer” Award from the Untermyer Performing Arts Council in 2011. Arlene also loved gardening, painting, and doing just about anything with or for her grandchildren. Arlene was preceded in death by her cherished husband, Ernie, and her beloved brother, Richard Gardner. She is survived by her three daughters (Sally, Janice and Nora); sons-in-law (Bob, Armand and Justin); eight grandchildren and their spouses (Jillian and Brian, Nicholas and Bea, Olivia, Chrisopher, Marietta, McKenzie, Daisy and Lucy); beloved sister, Jane; sister-in-law, Jacki; six nieces and nephews; and seven grandnieces/nephews. In lieu of flowers, the family welcomes a donation to Actors Conservatory Theatre; and, in honor of her husband, who was a proud United States Marine veteran, to Operation Second Chance. Viewing hours are Thursday, July 14th and Friday, July 15th at 4pm-8pm Edward F. Carter Funeral Home 41 Grand St. Croton-on-Hudson, NY 10520 The funeral will be Saturday, July 16th at 10am Holy Name of Mary 114 Grand St. Croton-on-Hudson, NY 10520 Burial Following Funeral Mass Ferncliff Cemetery 280 Secor Road Hartsdale, NY 10530
See more See Less

In Memory Of Arlene M. Wendt