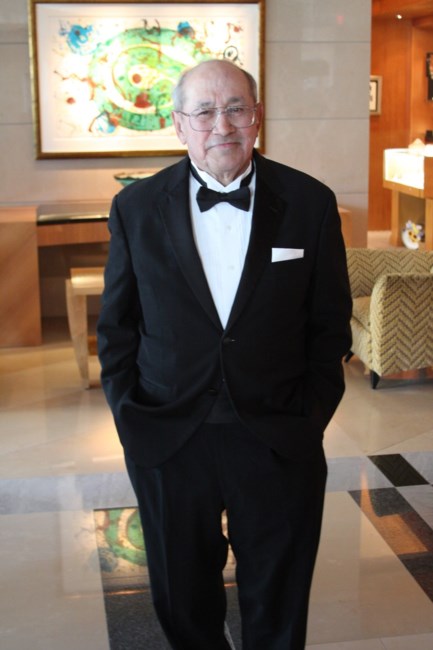 Clement S. Rivera, a longtime resident of Croton-on-Hudson, NY, passed away on August 14, 2022 at the age of 90 surrounded by his beloved family. Clement was born on December 1, 1931 to the late Frank and Felisa (Sanchez) Rivera in New York City. He served in the United States Navy from 1950-1953 during the Korean War. He received the National Defense Service Medal; the Korean Service Medal; the United Nations Service Medal; and the Navy Occupation Medal (European Clasp). Clement graduated from Robert Louis Stevenson High School in New York City. He then attended and graduated from New York University with a major in Theater Management. He started as a film editor for NBC television and worked his way up the ranks to be a production/unit manager. He worked as a unit manager on notable shows such as Saturday Night Live, David Lederman, The Today Show, and Bob Costas Tonight. He worked on special broadcasting of shows including The Miss America Pageant, The Thanksgiving Day Parade, The Rose Bowl, etc. He received his 1st Emmy in 1976 for Outstanding Individual Craft on his work on a documentary about the 1st Earth Day and his 2nd Emmy as part of the crew that orchestrated the 61st Annual Macy’s Day Parade. Clement is survived by his beloved and devoted wife of 57 years, Yvonne Rivera, his beloved children: Andrew Rivera (Barbara); Marlene Irving (Thomas); and Matthew Rivera (May), 5 grandchildren: Douglas and Felisa Rivera; Jessica Jackson (Jamal) and Alec Irving; and Zachary Rivera; respectively, and his brother in law John Morey (Ellen) and nephews Patrick and Daniel. He was a dedicated family man, attending sporting events of his children and grandchildren. He would travel across the country to cheer on his adult children in the various marathons that they ran. But, he was especially fond of traveling and attending any and all events of his grandchildren and nephews - from NCAA soccer games to family celebrations & gatherings to Army vs. Navy Games. Clem was always the life of the party, he greeted everyone with ‘Hello Lovie!’, and made everyone feel welcomed and loved no matter where he was or who you were. He was a dedicated member of Holy Name of Mary congregation, where he was named Man of the Year in 2004. You would often find him cooking at the annual fundraiser. Clem belonged to the Knights of Columbus where he was recognized for his service to the Knights and received a Certificate of Appreciation for his outstanding and dedicated service in 2015 from the Westchester-Putnam Chapter. Visitation is scheduled for Wednesday, August 17 from 3-7pm at Holy Name of Mary Church, 114 Grand Street, Croton-on-Hudson, NY. A Mass of Christian Burial is scheduled on Thursday, August 18 at 10am at the Church. Interment to follow at Bethel Cemetery. Fond memories and expressions of sympathy may be shared at www.efcarterfuneralhome.com for the Rivera family.
See more See Less

In Memory Of Clement Rivera