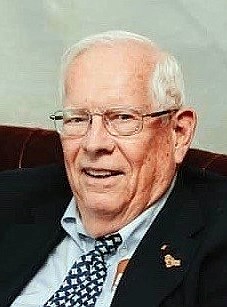 Long time Croton on Hudson community member Don Parrish passed away on January 18, 2020, at New York Presbyterian/Columbia University Medical Center in New York, NY. Don was the son of Ross and Lena Parrish of Daytona Beach, Florida. Born on January 10th, 1936, he grew up in the family’s Goodall Avenue home. He attended Lenox Avenue Elementary School, and graduated from Seabreeze High School in 1953. He earned his Bachelor’s Degree at Ohio Wesleyan University in 1957 where he was a member of Kappa Sigma fraternity, and a second Bachelor’s Degree in Civil Engineering at Massachusetts Institute of Technology in 1959. He earned his MBA at New York University in 1973. Don met, and later married, fellow Ohio Wesleyan University student, Mary Elisabeth (Molly) Spring, who survives him. They were wed on August 16th, 1958, in The Little Church Around the Corner in New York City. Don and Molly began their married life in Boston, Massachusetts, while he completed his studies at MIT. They moved to White Plains, NY, in 1959, where he began work as a Civil Engineer with the New York Central Railroad. The family moved to Croton on Hudson in 1967. After a number of years with the NYCRR, Don’s interests broadened to include Real Estate and Banking. He worked for many years in commercial banking administration and consulting at a number of financial institutions; including Bankers Trust, The Seamen’s Bank for Savings, East River Bank for Savings, Deutsche Bank and Citibank. Don and Molly were blessed with three children, Sarah Parrish Christensen (Miles Deutsch), Ross William Parrish, and Caitlin Parrish McDonough (Anthony). They have two grandchildren, Cody Dylan Christensen (Alison), and Noelle Chelsea Christensen (Ryan Lee), great-grandchildren, Caden, Greyson, Caleb, and another great grandson expected in late March. He was pre-deceased by his daughter, Caitlin, in 2008, and his sister, Anita Faye Parrish Emery of Daytona Beach, in 2018. Don retired in 2003 and was able to enjoy his many varied interests including travel, history, art, cooking and the out of doors. He was active in many circles, was a long-time member of Croton Friends of History and the Unitarian Universalist Congregation of the Hudson Valley. Don treasured relationships with people, and made friends wherever he went; he cherished his long-term friendships, and was particularly fond of the men of his “breakfast group”. Calling hours will be on Saturday, February 8th from 2-4pm and 7-9pm at Edward F. Carter Funeral Home in Croton on Hudson, NY. A celebration of his life is being planned for later this Spring. Donations in his memory may be made to: Croton Friends of History P.O. Box 193 Croton on Hudson, NY 10520 www.crotonfriendsofhistory.org Compassion and Choices www.compassionandchoices.org Lakes Environmental Association 230 Main Street Bridgton, Maine 04009 www.mainelakes.org
See more See Less

In Memory Of Donald R. Parrish