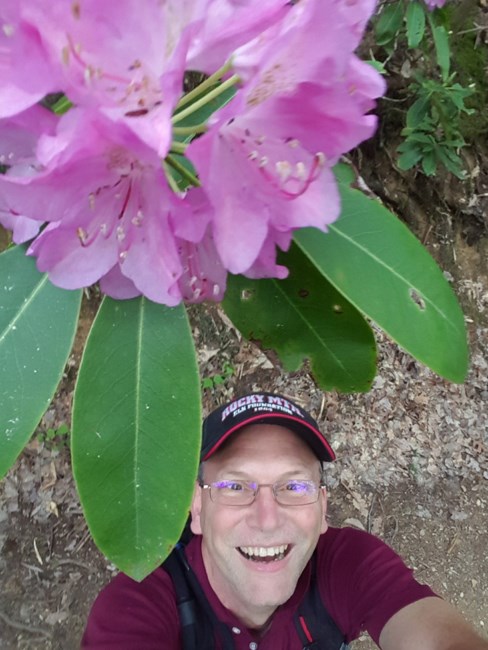 On Sept. 30, 2021 Howard (Howie) Bott suddenly passed into the heavenly light with a bombardment of fireworks at a mere 57 years young. This vibrant, larger-than-life, giant of a giving spirit spent his last day with us helping neighbors and getting us ready for another rendezvous at Talladega with friends. His favorite elixirs were packed in the motorhome first, along with enough batteries for our race radios, and an invitation on his tongue for more friends to experience the fun with us. A man of adventure and exploration, he provided his spouse, Margo, of 28 years, with excitement, challenges, love and laughter, while wrapping family and friends in his strong arms and magnanimous character along the way. He was a dinosaur in his tool and die trade-none like him. He wasn’t afraid of getting dirty, hot, and sweaty, but he could polish up like a star. He was a hunter-gatherer of friends and family, and a builder of wood, metal, and relationships. If you met him, you wouldn’t forget him, because he’d probably leave you laughing and feeling better about yourself. He wasn’t a bible thumper, but he had an apostles heart for God. His ‘Git-R-Dun’ spirit was contagious and he truly lived his faith. He was an active member of the ‘Knights of Columbus’ in both Tennessee and Alabama, which is a charitable Catholic men’s organization, and of late he sponsored two new members. As giving as he was all his whole life, he continued to give of himself on his path to the pearly gates by holding on to this earthly plane by a toenail to drop off a few precious packages along the way. Always thinking of others, he dedicated his body to organ donation through Alabama Legacy for Hope. He was the youngest of a family of seven, and so endeared to his mother that he called her every day after work. He would encourage others to do so, and if you told him you didn’t know your neighbor of (25 years) he would ask you, “why not?” And if you felt you shouldn’t intrude on another person, he would do it for you! He was a master griller and, with very short notice to Margo, he would invite you both over for bar-b-que and drinks, and next thing you know you have a new friend. He was preceded in death by his highly respected father, Howard Bott, Sr., many loving uncles and aunts, cousins, and friends, undoubtedly waiting to wrap him in their loving hugs. Survivors include: his mother, Teresa Bott, who we lovingly refer to as St. Teresa. His Brothers: Don (Catharine) Bott, and Carl (Sue) Bott, His sisters: Patricia (Dave) Ramsay, Rita (Carl) Cray, Marilyn (Dennis) Odziana, and Barb (Daryl) Crawford whom he poured out his titanic heart to on a daily basis, and with whom he also shared a love of restoring antique vehicles. Additionally, he is survived by a host of in-laws and out-laws, he also leaves behind many nieces and nephews who adore and emulate him as a man of honor, integrity, and decency. Nevertheless, the mischievous child in him would always tease, wrestle and prank to elicit laughter and amusement. The Mass of Christian Burial for Howie Bott, 57, of Cullman will be at 10:00am on Fri. Oct. 8, 2021 at Sacred Heart of Jesus Catholic Church, in Cullman, AL. A luncheon will be provided for family and friends afterwards in the Family Life Center. Visitation will be Thurs. Oct. 7 from 6:00pm to 7:30pm in the Church. We will pray the Rosary from 7:30pm to 8:00pm in the Church on Thurs. evening. Visitation will continue afterwards if needed. Moss Funeral Home is in charge of the arrangements. Margo and family strongly encourages in lieu of flowers, donations be made to the Knights of Columbus in his honor or to Legacy of Hope.org.
See more See Less

In Memory Of Howie Bott Jr.