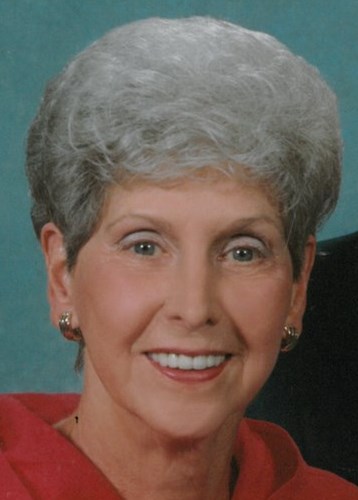 Mary Tillman Clark, of Cullman passed away on Saturday, May 9, 2020 at the age of 85. She was born on September 23, 1934 in Simcoe, AL to Benjamin and Lesta Bea Smith Tillman. After the death of her father, Mary and her mother moved from Simcoe to Cullman in her teenage years. Her mother worked at a grocery store nearby and they became active in 7th Street Baptist Church. Mary loved roller skating and spent a lot of time at the skating rink, where she eventually met her future husband. They skated their way right into marriage, but Pat was soon called to the Korean War. Mary then worked as a hair dresser until she realized that her calling was to be a stay-at-home mother. Pat continued his father’s work at Cullman Savings & Loan, which gave the couple many opportunities to enjoy traveling to meetings together. Mary also worked as a teller there. While her children were attending Sacred Heart School, Mary was baptized and became a member of Sacred Heart Church, where she has been a lifetime member and was a part of many functions with her family there. She was much like a backstage worker, keeping her household running smoothly, meeting her children’s needs and preparing all the props for the next event. She really enjoyed flowers: planting them, caring for them, and watching them grow. Her courtyard could have easily been featured in Better Homes and Gardens. Mary and Pat enjoyed dancing together and could easily take over the dance floor and put on a show for family and friends. She enjoyed playing cards and board games with the whole family. Her true joy in life was her children and grandchildren. After the loss of her husband, she decided to move to Morningside Assisted Living, where she enjoyed her last four years. She was loved deeply by her family and many friends and will be greatly missed. She is preceded in death by her parents; husband, Patrick Clark; sister Gwynith Tillman and brother Wiley Tillman. Her survivors include her children: Cheri Christopher of Cullman, Greg (Cathy) Clark of Hoover and Marcus (Jennifer) Clark of Cullman; grandchildren: Jason (Melissa) McEntire, Mandy (Brad) Wilson, Zac (Marina) McEntire, Sally Clark, Andrew Clark, Joey (Callie) Clark, Colby Clark and Cory Clark and great grandchildren: Owen McEntire, Evan Wilson and Molly Wilson. Visitation will be held at Sacred Heart Catholic Church on Sunday, May 17, 2020 at 6:30 p.m. followed by a Rosary Service at 7:30 p.m. The Memorial Mass for Mrs. Mary Tillman Clark will be held on Monday, May 18, 2020 at Sacred Heart Catholic Church with burial to follow at Sacred Heart Cemetery. Flowers will be accepted or donations in Mary’s memory may be made to St. Bernard Preparatory School, Benedictine Sisters-Sacred Heart Monastery or Sacred Heart Catholic Church. Condolences and special memories may be shared with the family at mossservicefh.com
See more See Less

In Memory Of Mary Tillman Clark