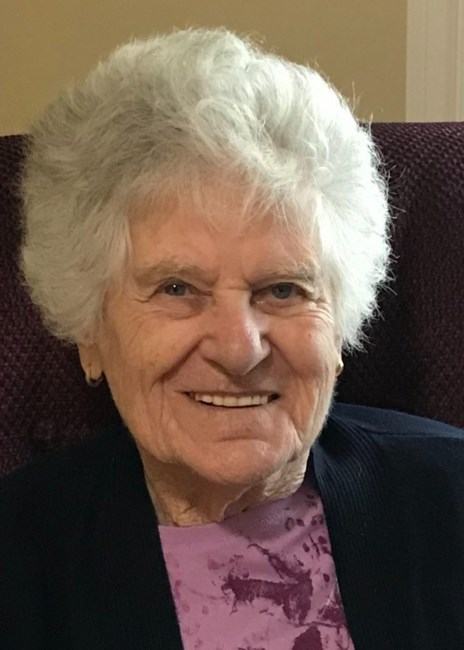 It is with great sadness that we announce the death of Mrs. Mary Palmater on September 22, 2022, at the Campbellton Regional Hospital at the age of 98. She passed away peacefully surrounded by her family. Born in England on December 14, 1923, daughter of the late Margaret (Hayes) and the late Alfred Parr. She is survived by her children: Sheila Richmond (late Donald) of Globe, Arizona; Linda Jollymore (James) of Mission, BC; Michael (May) of Eel River Bar, NB; Keith (Frances) of Kelowna, BC; Paul (Hélène) of Dalhousie, NB; Pamela McMillan (Raymond) of Oxford Mills, Ontario; Catherine Clarke (David) of Oxford Mills, Ontario and her sister Sheila Gardner of England. She will be lovingly remembered by her 11 grandchildren and 14 great-grandchildren. As well as several nieces and nephews, great nieces and great nephews from Canada, England and Australia. She was predeceased by her husband Walter, daughter Wendy Bangay (Brian), sisters Eileen and Katherine. Mary immigrated to Canada in May 1946 as a war bride, arriving on the RMS Queen Mary in Halifax before travelling by train to Dalhousie, NB. We admire her strength and courage in having the ability to adapt to the changes in her life following her arrival from England with her young daughter. She encompassed many adventures in her new life in Canada. Mary was the matriarch, loved dearly by all her family, friends and all who crossed her path. She was always ready to put the kettle on for a cup of tea and a chat. Mum/Granny will be greatly missed and has left a lasting legacy with so many cherished memories for us all. Mary was a member of the CWL and Royal Canadian Legion, as well as the Canadian War Brides. Special thanks to the staff of the Darlington Manor for their care and compassion, as well as the doctors and staff of Emergency and Palliative Care at the Campbellton Regional Hospital. A funeral will be held at a later date. Funeral arrangements are entrusted in the care of Maher’s Funeral Home, Dalhousie. (506)789-1699 or toll free (855) 404-1699 email: maher.fh@nb.aibn.com
See more See Less

In Memory Of Mary (Parr) Palmater