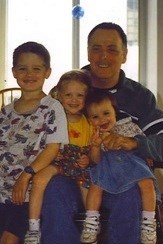 Philip Thompson passed away peacefully on June 7th at the age of 78 after being hospitalized for several months at Mount Sinai Hospital, Toronto and then Toronto Grace Health Centre. He was born in Charlo Station, NB in 1942 to his predeceased parents Alvin and Clara Thompson. Phil is survived by his loving daughter Sylvia (Rick) and Philip Jr. and proud Grandad to Owen, Audra and Rachel. He is also survived by his sisters and brothers, Hazel (Omer), Glenford (Patricia), Nora (Blair), Kenneth (Dianne), Robert (Ruby), Mary Lee, Sandra (Michael), and Leo (Grace). He was Uncle to several nieces and nephews. He was predeceased by his brothers, Roy (Agnes) and Bertram (Aline) and sisters, Betty Ann (Jerry) and baby Mary. Phil served in the Armed Forces for a short while. He worked as a Boilermaker (Welder) for over 20 years. He loved fishing, camping and boating. He continued to enjoy life even though an accident at the age of 41 made him a quadriplegic. He lived in Toronto and each summer he travelled to his cottage in Charlo. He enjoyed music and went to several concerts including Rod Stewart and Pink Floyd. Phil’s children and grandchildren meant the world to him. He loved family. The funeral Service will be held at Saint François Xavier Church, Charlo, NB on Monday August 2, 2021 at 2:00 pm. To attend the funeral, please call to register at 506-684-3292. Special thanks to all the caregivers who have provided great care to Phil including Dawson, Kathy, Darek, Erika, Karla, Ganga, Aishwarya and others. Thank you to the doctors and staff at both Mount Sinai Hospital and Toronto Grace Health Centre for all the care and support you provided. Donations to the Spinal Cord Injury Ontario or the Cancer Society of Canada would be appreciated by the family. Funeral arrangements are in the care of Maher’s Funeral Home, Dalhousie. (506)789-1699 or toll free (855) 404-1699 email: maher.fh@nb.aibn.com
See more See Less

In Memory Of Philip Robert Thompson