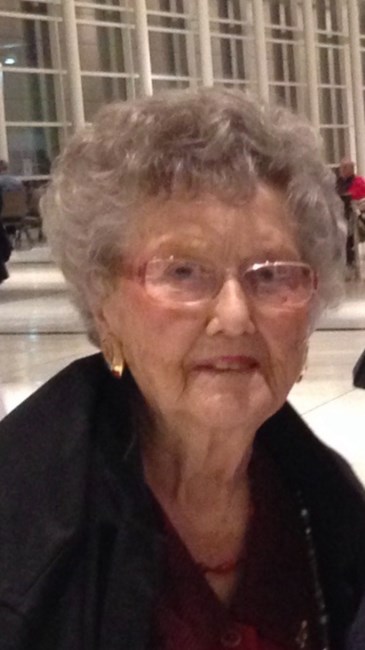 Anita Jo Cates, also known as “Mom”, “Grandma”, “Aunt Nete” and “Jo” went to be with the Lord on September 15, 2022 after recently becoming a centenarian. She was born in Paoli, Oklahoma on February 8, 1922 to Sidney and Jimmie Renfro. She had an older brother, Ollin and a younger brother, Sid; both of whom preceded her in death. Growing up on a farm in Oklahoma, Jo was eager to come to Dallas after graduating from high school to pursue a nursing career in the big city but plans changed and she became a working girl instead. She worked for North American Insurance and various other companies before meeting Van on a blind date in 1949. The two were married in January of 1950 and three adorable children,Johnny, Sandra and Sid soon followed changing their lives forever. As working parents life was busy with three kids. Jo was a strict disciplinarian with John and Sid but Sandra experienced her softer side. She and Van were involved for many years with school activities and playing dominoes with friends. Jo had an infectious laugh, great sense of humor and enjoyed family life to the fullest. Years later, as a widow, she and Sandra faithfully attended Wynnewood Baptist Church where they were both baptized in 2013. She also became quite adventurous traveling to many places with her brother, Sid and his wife, Gloria. They vacationed in Hawaii many times, California, South Carolina and Missouri. Jo took pleasure in her senior years by doting on her five grandkids and later her five great-grands. She also found the time to work for a non-profit, a local bakery and sit with the elderly. Grandma always found a way with words or actions to make you feel special and loved. Her joy, servants heart and devotion to her family were just a few of the characteristics that made her remarkable. The family has been blessed beyond measure and benefited greatly from her extended time on this earth. Those left to savor her memories are her children, John, Sandra and Sid (Teri); grandchildren Christy Choat (Chris), Jason (Laura), Cameron (Traci), Connor and Steven; Great-grands, Cale, Luke and Allie Choat, Van and Gus Cates; several nieces and nephews who lovingly called her Aunt Nete. A visitation for Anita will be held Wednesday, September 21, 2022 from 10:00 AM to 11:00 AM at Laurel Land Funeral Home, 6300 South R.L., Thornton Freeway, Dallas, TX 75232. Following the visitation will be a graveside service from 11:00 AM to 12:00 PM at Laurel Land Mem Park - Dallas, 6300 S. R.L. Thornton Frwy., Dallas, TX 75232. Fond memories and expressions of sympathy may be shared at www.laurellanddallas.com for the Cates family.
See more See Less

In Memory Of Anita Jo Cates