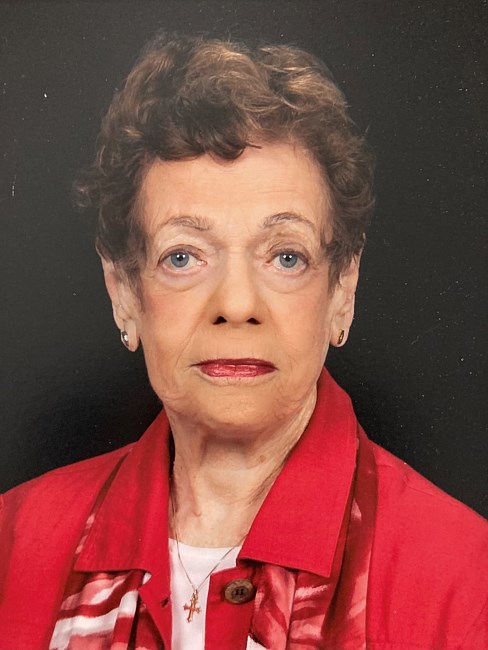 Betty Baskett was born at the old St. Paul’s Hospital in Dallas, Texas, on Easter Sunday, April 1, 1923. The family moved from Burlington Blvd in Oak Cliff to Clayton Avenue in the Lakewood section of Dallas when Betty was three years old. Betty had one brother, William Caughron, who was born in October 1926, along with mother, Maurine Caughron, and father, Bert Caughron. Betty attended the old Ursuline Academy, which was located on St. Joseph Street between Bryan and Live Oak near downtown, for her elementary schooling. She transferred to Woodrow Wilson High School and graduated in May 1940. She entered Texas State College for Women (Texas Women’s University) her freshman year of college. The next year she transferred to Texas Tech University in Lubbock where she majored in Spanish. In the summer of 1942, she was offered a position as Secretary and Translator with the Department of Agriculture (Farm Security Administration). She worked there until 1951. She married Robert Baskett in November 1949 at The Church of the Incarnation, Episcopal. In 1946 Betty was confirmed into the Episcopal Church, she was an active member, holding a number of offices, until 1991, when she and her family transferred to St. Matthew’s Cathedral, Episcopal. There she was a Lay Eucharistic Minister, Lector, Altar Server, Acolyte and served on the Vestry. Three sons were born to Betty and Bob, Stephen Baskett, Mark Baskett, and Jonathan Baskett. In 1960, Betty and Bob built a home in the Lake Highlands area of Dallas and moved in March 1961, where she lived for sixty years. In 1975 Betty returned to school to complete her college degree. She entered The University of Texas at Dallas. She was active in all aspects of University life. In 1978 she graduated Magna Cum Laude with a degree in Arts and Humanities. She was voted by the faculty and students to be a member of Who’s Who in American Colleges and Universities. She went on to Graduate School and in 1986 received her Master’s Degree in Humanities. Other schooling includes: two summer sessions at The University of Guanajuato in Mexico (through the auspices of North Texas University) in 1945 and 1946; a summer session at Cambridge University in Cambridge, England in 1989. Betty enjoyed a lifetime love affair with England and visited there every year starting in 1971. In September of 1986 Betty became a volunteer at the Dallas Zoo. She was a Research Assistant, Lecturer, Tour Guide, and Monorail Narrator, plus hands-on animal work. In 1998 Betty became a volunteer in the Emergency Room at Baylor Hospital. She dealt directly with patients, assisting nurses and physicians where possible, and acting as liaison between patients and their families. Having been trained by the church in Death and Dying Counseling, she served with chaplains in comfort to the bereaved at a loss of life. One of her greatest services was her fluency in Spanish. Betty traveled extensively. In addition to her many trips to the UK, which included England, Ireland, Scotland and Wales, she traveled a number of times on the Continent. She traveled in Italy, France, Germany, Austria, Switzerland, Belgium and Holland. She made numerous trips to all parts of Mexico. With nature groups from the Dallas Museum of Natural History, she spent time in Alaska, and she went on a bird watching expedition to Trinidad and Tobago off the cost of Venezuela. She traveled to Africa in 1998 with a Zoo group where she enjoyed the game parks of Kenya and Tanzania. In 1999 she went on an expedition down the Amazon River in South America, touching in Peru, Colombia, and Brazil. Domestic travel included many parts of the United States, most frequently to the Big Bend country of Texas, the Texas Hill Country, and to Oregon in the great Pacific Northwest where one of her sons lived. Betty is preceded in death by her mother, Maurine Caughron, her father Bert Caughron, her brother William Caughron, and her husband Robert Baskett. Betty is survived by her son Stephen Baskett and his wife Cecile; her son Mark Baskett and his wife Cheryl; and her son Jonathan Baskett and his wife Jill; her grandchildren Amanda, Devon and Charles, and Lauren and Caroline; her step-grandchildren William and Cody; and her great-grandchildren Gwenyth and Ellery; her sister-in-law Ann Caughron; and her nephew Jeffrey and his wife Faith; and countless wonderful friends from the Lake Highlands neighborhood, St. Matthew’s Cathedral, the Dallas Zoo and the Baylor Hospital emergency room. Betty’s remains will be cremated with a small token sent to be scattered by friends in the country side of her beloved England, and a small token to be sent to Bandera, Texas to be scattered by her friends in her equally beloved Texas Hill Country. Fond memories and expressions of sympathy may be shared at www.Grove-Hill.com for the Baskett family.
See more See Less

In Memory Of Betty Maurine Baskett