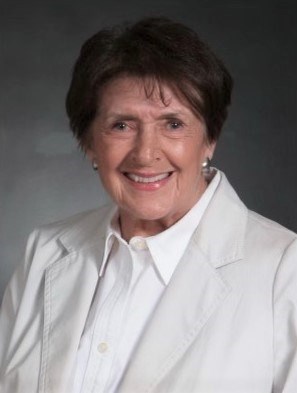 CHARLOTTE CHRISNEY EMERY Charlotte Chrisney Emery was born on May 22, 1928, in Chrisney, Indiana, the daughter of Garland and Lillian Chrisney. The small southern Indiana town where she was born was named for her great-grandfather, J.P. Chrisney, the town’s founder. Charlotte was a wonderful wife, mother of three children, and a grandmother and great-grandmother extraordinaire, known to all her grands as Mom-o. She attended Indiana University where she was a member of Pi Beta Phi. After moving to Dallas with her husband, Gene, Charlotte became a member of the Junior League of Dallas and the Dallas Woman’s Club. She was also a member of Highland Park Presbyterian Church and was an active participant in Marjorie Currey’s Study Group and the Craig Class. Charlotte was a photographer, both amateur and professional, and always had her camera in hand at family gatherings where family portraits were, for her, a work of art. Charlotte was an avid golfer and played in Dallas at Northwood Club and at Dallas Country Club, where she was a member of the Women’s Golf Association. Charlotte made three holes-in-one during her golfing career (two more than her husband, Gene, who was himself quite a golfer), and she considered a weekend golf outing at the Augusta National Golf Club, complete with accommodations in the famous Firestone Cottage, as one of her many golfing highlights. Charlotte is survived by her daughter, Kathy Miller. Her husband, Gene Emery, and her sons Steve and Chris Emery, preceded her in death, as did her brother, Jud Chrisney. Mom-o is also survived by her grandchildren, Kristin Hayden, Peter Miller and Laura Emery, and her great-grandchildren, Jim Hayden, III, Emery Hayden, Charlotte Hayden, Saoirse Clarke, Guinevere Clarke and Cillian Clarke. Charlotte was an avid dog lover, having several Westies over the years. Her faithful and beloved Westie, Holly, will remain in the family and no doubt be a source of memories of Charlotte during the coming years. Charlotte’s family would like to thank UT Southwestern and Dr. Namirah Jamshed’s team for the exceptional care they provided for Charlotte for many years, as well as all the wonderful women who were caregivers at the time of her passing: her long-time housekeeper, Irene Gomez, along with Henry Holland and his caregiving team, Estela Oliver, Kathy Turner, Dorothy Redy and Azucina Quinones. The family also wants to thank Peter, Mary, Tammy and the rest of the team at Divinis Care Hospice for the care and comfort they provided to Charlotte and the family during the past year. There will be a private interment service for the family and, in the next few weeks, a celebration of Charlotte’s life. In lieu of flowers, Charlotte requested that a donation be made to the Society for the Prevention of Cruelty to Animals (SPCA), 2400 Lone Star Drive, Dallas, Texas, 75212; Highland Park Presbyterian Church, 3821 University Blvd, Dallas, Texas, 75205; or a charity of your choosing.
See more See Less

In Memory Of Charlotte Chrisney Emery