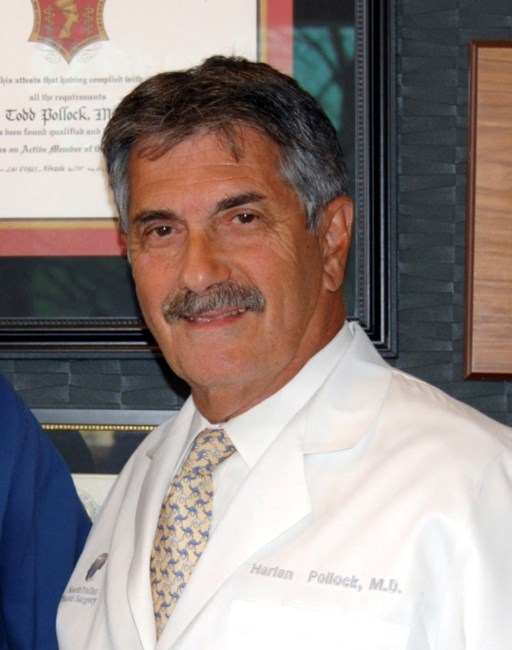 Harlan Pollock, MD, 82, passed away on September 30, 2020, surrounded by his beloved family, ending a long battle with multiple myeloma. He took on the challenge of fighting cancer with the same spirit and quiet strength with which he approached life — with optimism and a greater concern for his family and his wife than for himself. He was a unique individual with the inborn qualities of honor, morality, humility, caring, and giving. His character can best be described by the Yiddish word, "mensch." Harlan was born on October 17, 1937, and raised in the Columbus, Ohio, suburb of Bexley, the son of Russian immigrants who instilled in him a strong work ethic, love for family, country, and his Jewish faith. He graduated from Ohio State University and its medical school. While at Ohio State, he met the love of his life, and wife of 61 loving years, Hannah Kay Berger. They moved to Dallas in 1962, where he trained in surgery at Parkland Hospital. Notably, Harlan was on the surgical team operating on Lee Harvey Oswald. He served in the US army in the Brooke Army Hospital's famed burn unit, training in Plastic and Reconstructive surgery at Walter Reed Hospital and served at the Third Field Hospital in Saigon, correcting cleft lips and palates of Vietnamese children in his spare time. He was honored with the Bronze Star and completed his service ranked as a Lt. Colonel. He took great pride in his military service and giving back to his country. Returning to Dallas, he practiced plastic surgery for the next 44 years, touching the lives of so many. For 20 of those years, he was joined in practice by his son, Todd Pollock, MD, something he relished and which gave him great pride. Over the course of his career, he was an early leader, pioneering in electronic medical records, office-based surgery, and even developed a surgical technique for which he gained international recognition. The centerpiece of his life was his family, who he spent every day caring for and encouraging, always making them feel loved. He assumed the role of patriarch for his large extended family, making it a point to attend every life event, never missing an opportunity to give support and sage advice. Like the care and support he gave to his family, he quietly but doggedly supported his community and his Jewish faith, serving on committees, boards, and as president of many professional and charitable organizations including, the Jewish Community Center, Shearith Israel Synagogue, Jewish Family Services, and the Parkland Foundation, to name just a few. He is survived by his wife, Hannah Kay Berger Pollock, son Todd (Kasi Jones), daughters Tami (Craig Prengler) and Stacy (David Olesky), grandchildren Abby Pollock, Zach, Grant, Kyle Prengler, Jackson, and Griffin Olesky, and his brother Sanford Pollock. Donations in his memory can be sent to Multiple Myeloma Research Foundation at: https://walkrun.themmrf.org/dallas/teammustache or the Parkland Foundation, or Congregation Shearith Israel.
See more See Less

In Memory Of Harlan Pollock