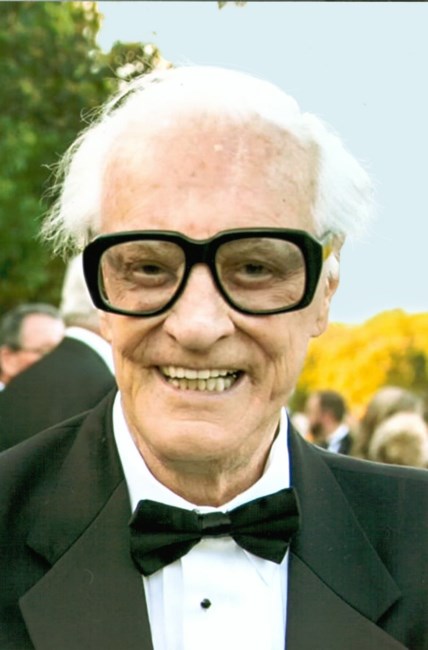 James G. “Rip” Collins, age 96, passed away peacefully on January 14, 2023, in Dallas, Texas. Rip was born in Oak Park, Illinois, on May 14, 1926, to parents James Vincent and Mildred Shirley Collins. He had two sisters, Delores Casey and Greta Ibarra. The family moved to Cleveland, Ohio, briefly, before settling in the Dallas, Texas, Highland Park neighborhood. He was a starting football player on the high school team was named to the All State Team in 1943. Rip served in the US Navy during WWII and was stationed on the USS Wichita in the Pacific. He is preceded in death by his parents, sister Greta, first wife Jody and sons Jim and Scott. He is survived by two children, Caren and Kyle and their spouses, numerous grandchildren, their partners and great-grandchildren. While attending SMU, he met and married Jo Ann (Jody) Wilson. They were a beautiful couple, fell head over heels for each other and had four children; Caren, Jim, Kyle and Scott. Business and family drew them to Wichita, Kansas. While the children were in their formative school years, Rip started Cowboy Cleaners and was known for his “Rip Predicts”, a weekly signage predicting everything from sports scores, weather and more. He returned to Dallas and founded his own business in the early 1980’s, developing his company that continues to thrive today. Never idle, Rip played tennis into his 80’s, was an avid reader, enjoyed live theatre in New York and London. He had many friends over the years that he could always count on for a lively social life. There was always an occasion for a good story. He loved to reminisce, regaling his well-lived life. Rip wants all who love him to know that he loves you in return and he is grateful for the gifts of friendship that you have given him over the years. The family thanks the caregivers who provided comfort and care in his time of need. He shared words of wisdom for living life to the fullest in his final days, “Have at it!” There will be a memorial service celebrating his life at 10:00 am on Saturday, January 28, 2023, at Sparkman Hillcrest Funeral Home, 7405 W. NW Hwy., Dallas, TX ,75225. Donations in Rip’s honor to your favorite charity, in lieu of flowers, is his wish. Also, The Texas Scottish Rite Hospital for Children or Meals on Wheels Dallas are organizations he was proud to support.
See more See Less

In Memory Of James G. Collins