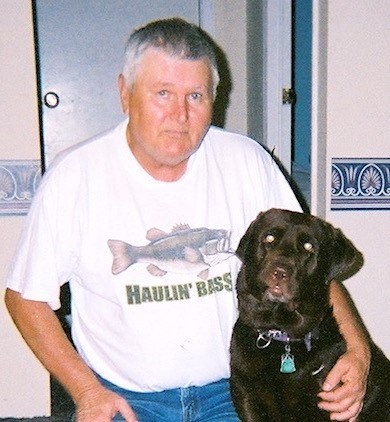 On Monday, January 16th, 2023, Leonard B. Brown Jr., a loving father and grandfather, joined our Lord at seventy-eight years old. Born to Leonard and Mamie Brown of Dallas, Texas on July 9th, 1944, Leonard grew up to become a tradesman and construction foreman. In 1967, he married Louise Lucille (“Lucy”) Brown, and they raised their family of girls in Mesquite, Texas. Together, they had three daughters, Shannon Onita Brown (now Schneider), Kelly Mae Brown (now Connally), and raised Stephanie Lynn Hyatt (now Boyce) together as one family. Leonard worked throughout Texas managing large construction projects for many years and retired early in 1994 after an unfortunate work accident that left him injured. Leonard spent many years on his country acreage outside of Ennis, Texas throughout the 1990’s and 2000’s. His passions were building model airplanes, hunting, fishing, and he was adamant that when airing, NASCAR or the Dallas Cowboys were to be on his TV. Leonard was the epitome of an avid outdoorsman, and would find any opportunity to hunt for deer, hogs, or go find a local fishing hole. There was never a western movie he didn’t like or an old country song he didn’t sing along to. “Pappy” would enjoy any and all time spent with his grandchildren, who frequently visited or stayed as long as they possibly could, as he would spoil them every chance he had. Leonard is survived by his three daughters, Shannon, Kelly, and Stephanie, four grandchildren, William Patrick Connally, Kate Addison Connally, VaLorie Michelle Brown (now Tally), Leonard Lee Stockton, and three great-grandchildren. Services will be held Monday, January 23rd, 2023, at Grove Hill Funeral Home & Memorial Park in Dallas, Texas, with visitation starting at 1:00 pm followed by his eulogy and burial service at 2:00 pm onsite. In lieu of flowers, the family is asking for donations to be made in his honor to the ASPCA, as he was an avid dog lover, and will be laid to rest with his companion’s ashes, “Big Dog Brown”.
See more See Less

In Memory Of Leonard B. Brown Jr.