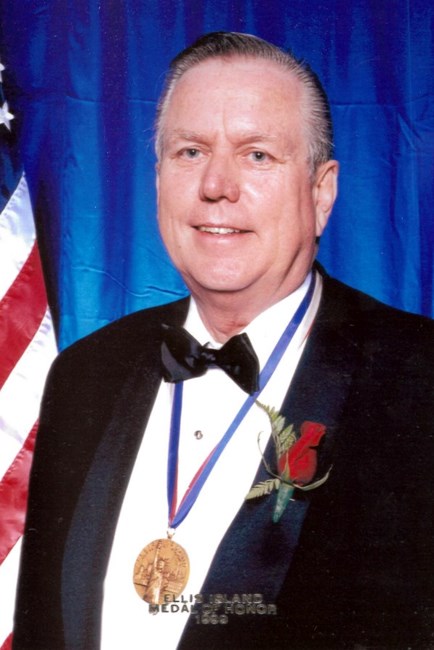 Martin Patrick Doolan was welcomed into Heaven on July 30, 2022, to share eternal bliss with his Savior and Lord, Jesus Christ and God the Father. Martin was born in Bronx, New York ,on January 12, 1940, and was preceded in death by his wife of 41 years, Grace Ann Hartnett Doolan, loving parents, Mary Margaret Geraghty and Thomas Francis Doolan, sister Margaret Kerwin and brother William Doolan. Martin is survived in life by his daughters: Theresa Doolan Davis, Jeanne Doolan Cunningham and husband Craig, and Jennifer Doolan Petty,;grandchildren: Preston Sherman Petty, Katherine Grace Petty, Christopher James Cunningham, and Luke Andrew Davis, sister Claire Gensch, brother Thomas Doolan and wife Betty; nephews: Brian Doolan, Billy Doolan, Scott Gensch, Michael Gensch, nieces: Debra Doolan Halsch, and Christine Miles; partner Sue Janice Mann. Martin attended St. Albert's Seminary in Middletown, NY, for three years and graduated from Cardinal Hayes Catholic High School in Bronx, New York, in 1957. He studied electrical engineering at City University in New York and later earned a Business Degree from Dallas Baptist College. As a first generation Irish American, Martin was the recipient of the prestigious 1999 Ellis Island Medal of Honor. Established in 1986 by the National Ethnic Coalition Organization, Ellis Island Award Recipients embody exceptional humanitarian efforts and contributions to fellow Americans. Previously a distinguished and highly-decorated military career, he retired as Captain in July of 1997, after 8 years active duty in the U.S. Coast Guard and 32 years of service in the reserves. He enlisted at the age of 19 during the Vietnam War and was stationed on the Vietnamese Coast and later spent 18 months in the Arctic at Cape Christian monitoring radar to protect against sneak attacks by Soviet bombers flying undetected over the North Pole. He attained the rank of Captain and was under consideration for Admiral when he retired. He had the honor of attending the Army War College on two separate occasions. Martin’s military career was augmented by an equally successful business career, which spanned a quarter of a century of executive management of corporate turnarounds with return to long-term profitability of numerous sizable corporations. He was mentored by Martin Dubelier in his 30’s when he trusted him with his first turnaround. He went on to do the same at BestTop, Pilliard Cabinet Company, ValueCity among others. He served as CEO, Chairman of many companies, including American Eagle Outfitters, NalTex which later became Delstar, DSW Shoe Warehouse and also served on Boards and as an advisor for dozens of companies under the portfolios of RFE, WestView Capital Partners and Weston Presidio. Martin’s ability to salvage the equity value in these corporations enabled their continual growth for both shareholders and the thousands of Americans employed within these firms. He paid it forward and was a mentor to many who went on to do great things in business. He was a founding shareholder of Texas Capital Bank. His accomplishments also included the creation of Sunwest Ventures with a factory in Taiwan and later gained approval for multiple US Patents. Martin’s family was his greatest treasure. He was a loving father and devoted “Papa” to grandchildren Preston, Katherine, Christopher and Luke. He had a passion for the outdoors, water, travel and took great pleasure spending time at his lake house boating, fishing, tubing and water skiing with family, especially grandkids. Although he was born in the city, he felt most at home at his lake house or at Irish Meadows, his ranch in East Texas. He took pleasure teaching his grandkids lifelong lessons while fishing and toasting marshmallows by the bonfire. He shared special moments and memories with them with trips to Mexico and the Bahamas. Martin will be remembered for his work ethic, determination, sense of humor, warm personality and generosity. He was a brave man of integrity. His giving heart touched the lives of those friends, family and colleagues and made them better for knowing him. We are blessed to have Martin in our lives and we are comforted knowing that he is in a place of eternal happiness and peace. Visitation will be at 6:00 p.m. Thursday, August 4th, at Sparkman Hillcrest Funeral Home. Rosary to follow at 7:00 p.m. A Funeral Mass will be held at 11:00 AM, Friday, August 5th, at Saint Rita Catholic Community in Dallas on Inwood Road, Fr. Michael Baynham, celebrant. Pallbearers will be Preston Petty, Christopher Cunningham, Craig Cunningham, Kent Petty, Brian Doolan, Ken Holbrook. Interment will follow at Hillcrest Memorial Park, 7405 W. Northwest Hwy., Dallas. Interment is joinable through livestream https://vimeo.com/736618872 In lieu of flowers, donations can be made to the Swim Across America Innovative Clinical Trials Center at Baylor Sammons Cancer Center.
See more See Less

In Memory Of Martin Patrick Doolan