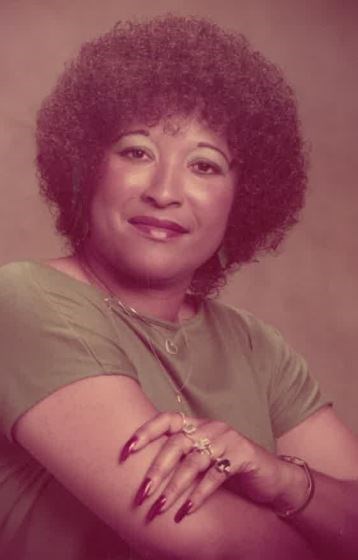 Reflections of Life OLA MARIE DURHAM was born April 20, 1943 in Lufkin, TX, to Johnnie Durham Sr., and Edna McKay Durham. Ola who’s nickname is Ricki was one of 11 children. She accepted Christ at a young age while attending Pilgrim Home Baptist Church and remained devout her entire life. She attended Dunbar High School in Lufkin, Texas. After high school Ola met and married Robert Lee Durham, who’s surname is the same as Ola’s maiden name. Immediately after marriage they moved to Dallas to start their future together. When they settled in Dallas being a person of faith she searched for a new church to worship and began attending Pilgrim Rest Baptist Church, Dallas, TX. Soon after two daughters were born to this union Velma and Carol. This marriage lasted sixty three years until her passing. Ola’s beauty and stature got her noticed by the designer of a clothing line and was offered a modeling job. She started a career in modeling for Mallory Clothing Boutique Dallas,TX that lasted five years. After her modeling career Ola realized how much she enjoyed helping and caring for people and started a career as a domestic care provider and was employed by Ann and Chet Lind of Dallas for five years. She went on to work for Dr. Louis Shlipak, MD, Internal Medicine, Irving TX, which lasted until she retired ten years later. Ola loved being outdoors in nature and she always made time to enjoy her passion. She was an avid fisher and would catch so many fish in one outing there would be enough available for many friends in her neighborhood who were waiting for her freshly caught fish. She had a green thumb and loved working in her flower garden keeping her plants well manicured. She also collected crystal in her spare time. She was known among close friends and family for her sense of humor and her contagious laughter. She was preceded in death by both her parents, Johnnie and Edna Durham, five siblings, Faye, Joe, Benny, Jane and Betty. She leaves to cherish her memories, husband Robert Durham, daughters Velma Cooks (Bruce) of Lewisville, TX, Carol Durham of Dallas, TX, and grandchild Sharonda Cooks of Dallas, TX; siblings Johnnie Durham, Jr. (Angie) of Stafford, TX, Mary Armstrong (Robert) of Lufkin, TX, Linda McKenzie (Michael) of Lufkin, Rose Fisher (Will) of Corrigan, Margie Sowell of Lufkin, TX, and a host of nieces and nephews. Fond memories and expressions of sympathy may be shared at www.laurellanddallas.com for the Durham family.
See more See Less