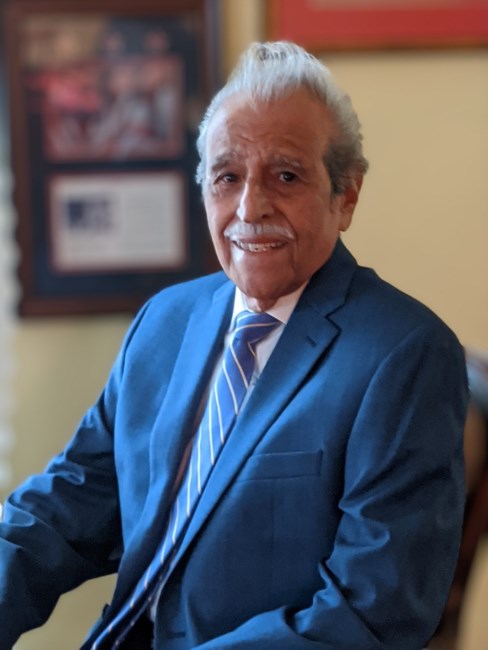 Richard Guerra, beloved husband and father, departed this life on Wednesday, September 21, 2022 at 91 years of age. He was a 1951 graduate of Crozier Tech High School and later served his country as a member of the United States Air Force. In 1956, Richard married the love of his life, the former Mary Helen Gonzalez, who gave him three wonderful children. He joined the Knights of Columbus in April 1965, serving with distinction in Councils 799, 5656, and 5538, where he achieved the rank of Grand Knight, in addition to serving as District Deputy and a 4th degree member of the Father Abram J. Ryan Assembly. In addition to his family and the Knights of Columbus, Richard’s passion was that of a dental technician and spent more than 50 years honing and perfecting his craft. He was an avid golfer, playing well into his eighties and was a lifetime fan of his beloved Dallas Cowboys. He and Mary Helen attended many home games together and even journeyed to New Orleans in 1978 to attend the Cowboys’ victorious Super Bowl appearance against the Denver Broncos. Additionally, Richard and his wife dedicated more than 15 years of their life in volunteer work for UT-Southwestern Medical Center in Dallas. Richard is preceded in death by his parents, Jose Guerra and the former Avelina Gutierrez, and siblings Roy Guerra, Rudy Guerra, and Dora Perez. He is survived by his wife of 65 years, the former Mary Helen Gonzalez, siblings Beatrice Vera, Vera Serna and Joe Guerra, daughter Cindy Robertson and husband James Robertson, daughter Lisa Guerra, and son Rich Guerra and wife Mary Patricia Guerra, all of Dallas, TX, as well as several nieces and nephews. Visitation and a rosary will be held on Friday, September 30, 2022 at 11:00 AM, followed by a funeral Mass at 12 Noon and a private interment, all held at Calvary Hill Funeral Home, 3235 Lombardy Ln., Dallas, TX 75220. A reception will be held from 2 to 4 PM at Knights of Columbus Dallas Council Hall #799, 10110 Shoreview Rd., Dallas, TX 75238. Contributions in Richard’s name can be made to St. Monica’s Catholic Church or Knights of Columbus Council 5656.
See more See Less

In Memory Of Richard Guerra