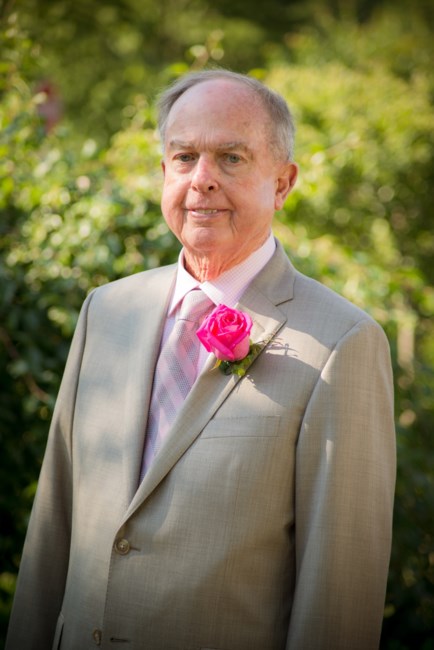 Bob Wallace was born in Toledo, Ohio on May 30, 1940 to Margaret and Robert A. Wallace, Sr. and died in Dallas on May 14, 2019 surrounded by his loving family. He moved to Houston at a young age and grew up there, graduating from Lamar High School in 1958. He attended SMU and later, the University of Houston where he obtained his BA degree in 1962. Bob then obtained a JD degree in 1965 from the University of Houston, College of Law. After a brief period in private practice in Houston, Bob joined Getty Oil Company in Los Angeles where he soon began a long career as an international petroleum attorney. In 1978 he joined The Louisiana Land and Exploration Company as an international attorney and worked in LL&E’s New Orleans and later London, England offices. In 1989 Bob joined Hunt Oil Company in Dallas where he retired in 2000. Bob was well respected by his peers, traveled the world and made many life-long friends. Bob was a member of the State Bars of Texas and California. He was also a member of the Association of International Petroleum Negotiators. Bob was predeceased by his parents, Margaret and Robert A. Wallace, Sr. and his sister Suzanne Artz and by Dorothy Wallace, his wife of 38 years who passed away in 2009. Bob leaves behind his soul mate and travel companion Jackie Caswell whom he married in 2017 after a long courtship. Also surviving are Bob’s sons, Greg Wallace of Hot Springs, Arkansas and Glenn Wallace of Denton, Texas, and many nieces, nephews and their families. Bob was a member of Saint Michael and All Angels Episcopal Church where he served as an usher for many years and more recently as an acolyte and chalice bearer for many years and more recently as a Lay Eucharistic Visitor, Faith and Grief facilitator and Meals on Wheels volunteer. He was also a member of the Brotherhood of Saint Andrew. In addition, he served as an adult teacher in Troop 82, Boy Scouts of America. In his spare time, Bob very much enjoyed exercising, having lunch with his cronies, playing the piano, attempting daily NY Times crossword puzzles, tending to his roses and spending time with his dogs, Cookie, Rosie and DeeDee, and cats Bo and Joe. A memorial service celebrating Bob’s life will be held at Saint Michael and All Angels Episcopal Church, 8100 Douglas Avenue, Dallas on Tuesday, May 21, 2019 at 4 o’clock pm. Interment will be private. In lieu of flowers, it is requested that remembrances be made to Saint Michael and All Angels Episcopal Church or a charity of your choice.
See more See Less