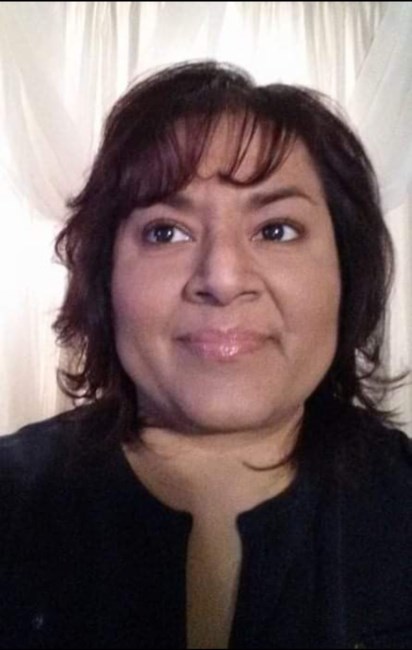 Ms. Theresa Copeland, age 55, of Lancaster, Texas passed away on Thursday, May 5, 2022. Theresa was born September 14, 1966. Reflections of Life Theresa Ann Copeland (Lugo) was born on September 14,1966, in Dallas, TX. She blessed the union of Federico Gaytan Lugo and Edubigen (Lugo)Fuentes-Sanchez. The family later settled in Lancaster, TX. where Theresa A. Copeland (Lugo) attended school in Wilmer-Hutchins I.S.D. She received her higher education at El Centro College. Theresa was a single parent of Reggie Jackson Jr., when she met Ostby Copeland they established and maintained their relationship. Theresa continued her education while working for D.A.R.T. Theresa excelled in her position with D.A.R.T and earned a promotion. Then she decided to make her career with D.A.R.T. for 20+ years. Theresa was a blessing to those who rode her bus but” she impressed upon those who got out of line to follow the rules or, get off her bus. Theresa and Ostby were married May 25, 2002, their union was blessed with Franchiesca and Nickolas. She was a hard-working wife, mother, grandmother, daughter, sister-in-law, niece, and friend. Theresa loved God and was always seeking His will for her life. Theresa worshipped at the Church of Christ in Hutchins, TX. where she was a faithful member until her passing. She enjoyed reading, creating floral arrangements, watching movies, listening to music and, spending time with her family and friends. Theresa especially enjoyed talking about and, spending time with her grandchildren. They had a special place in her heart. Theresa is preceded in death by her father, Federico Gaytan Lugo. She leaves to cherish her memories, mother, Edubigen Fuentes-Sanchez (stepfather, Julio Sanchez), husband, Ostby Copeland, son, Reginald Jackson (Jamequa Jackson), daughter, Franchiesca Copeland (John Matthews), son, Nickolas, her grandchildren, Carter Jackson, Kashen Matthews, Cairo Jackson & Jasiah Matthews, Sister, Regina Sanchez-Cuenca (Carlos Sr.) nephew, Julio A. Sanchez, nephew, Frederico Sanchez, nephew, Carlos Cuenca jr. Also, aunts, uncles, nieces, cousins, and friends who loved her dearly. Fond memories and expressions of sympathy may be shared at www.laurellanddallas.com for the Copeland family.
See more See Less

In Memory Of Ms. Theresa Copeland