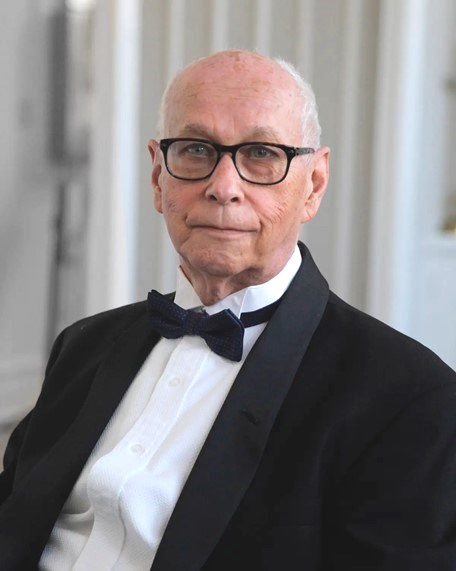 Maestro Arthur R. Sjögren died from Parkinson’s Disease in Danbury, CT on January 30, 2022. Art received a B.M.E. from North Park College, a M.M. from Westminster Choir College, and was a doctoral candidate at the Peabody Conservatory, Indiana University, and the Vienna Academy, Austria, where he studied conducting with Eric Erickson of the Royal College of Music, Stockholm and Swedish Radio Choir. He also studied conducting with Julius Herford, Robert Shaw, Fiora Contino, Volker Hemfpling, Marcel Courand, and Michael Schech. Art began his professional career as a singer in New York City in 1964. For three seasons, Art was a Vocal Arts Fellow at the Boston Symphony Orchestra’s Tanglewood Music Center where he studied with Phyllis Curtin and was soloist with Eric Linsdorf in the American premiere of Schoenberg’s opera “Die Glückliche Hand.“ At the Clevelend Orchestra’s Blossom Festival, he studied with Richard Miller and sang under choral conductor Robert Shaw who selected Art to be soloist with the Cleveland Orchestra in Handel’s Messiah and Bernstein’s Chichester Psalms. In 1975, Art founded the acclaimed Pro Arte Singers using professional singers from the NY metropolitan area and was its Artistic Director until 2017. As Director of Vocal Music at New Canaan High School for 33 years, Art formed the New Canaan Madrigal Singers and led the ensemble on 23 tours to Europe, India, Africa, the Far East, and South America. From 2010–2020, Art was the Artistic Director of Charis Chamber Voices in Westchester, NY, where he grew Charis into a regionally renowned choral group. Art was exceedingly proud of all the musicians he worked with over the years and the friendships that grew from creating music together. After Art’s retirement from New Canaan High School, he began a near daily yoga practice that, over the years, transformed his body and soul; his Norwalk, CT yoga community became another center of his life, and Art integrated what he learned through yoga into improving choral singing. Art served on the faculties of Westminster Choir College, Barrington College, Harvard University, and Fairfield University and taught private lessons, group and master classes in vocal technique and choral conducting internationally—notably, at the Musik Hochschule in Hanover Germany (2016), National Music Conservatory in Amman, Jordan (2010), Music Academy, Gdansk, Poland (2007), University of Pretoria, South Africa (2004–2010), and Drakensberg Boys’ Choir School in Cathkin Park, KwaZulu-Natal, South Africa. While at the Drakensberg Boys’ Choir School, Art encountered 14-year-old Liso Gcwabe. Art recognized Liso’s exceptional musical gifts and began providing him with private lessons, tutoring, and opportunities for musical growth – including trips to the U.S. to further Liso’s musical education. Over the years, Liso became a true and cherished son to Art. At times, Art could be a stern, no-nonsense teacher and conductor. But Art never lost his vision for what a singer or a chorus could become. Whether easing the screech out of sopranos, chiding altos for miscounting, pleading with tenors for more focus, or berating basses for falling behind the beat, Art always maintained exceptional professionalism and, usually, just a hint of delightful humor. For over 55 years, Art’s musical gifts brought a sense of accomplishment, wonder, and joy to thousands of musicians – including students, professional singers and instrumentalists, and members of volunteer choirs – not to mention the many thousands of people in his audiences. Art truly made the world a more beautiful place. Art grew up in a close-knit Scandinavian family In New Hyde Park, NY. For as long as any of them can remember, Art knew that he wanted to be a musician and singer. He never deviated from his dedication to those endeavors and patiently tolerated the tone-deaf singing of his cousins as he played the piano and led them in Christmas carols. Who knows what he was thinking. Those loving cousins include Richard Youngstrom, Carolyn (Youngstrom) Swenson, Edwin Youngstrom, Nancy (Youngstrom) Munn, Noah Youngstrom, Amelia Youngstrom, and Anne Kaufman. His presence will be sorely missed by all of them. At Art’s request, no funeral service will be held; however, a memorial concert will take place later this year. In lieu of flowers, please consider sending a contribution in Art’s memory to Charis Chamber Voices at P.O. Box 601, Bedford, NY 10506 or online through CharisVocals.com.
See more See Less

In Memory Of Arthur Sjögren