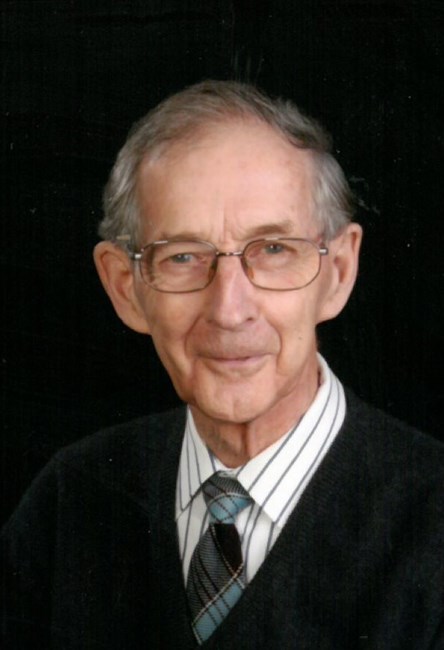 Died June 18, 2020 at Oakwood Terrace, Dartmouth at the age of 90. Beloved father of Elizabeth and Melanie, and much loved uncle to many. Allistair grew up in New Glasgow, Nova Scotia, part of a large, extended family of Scottish heritage and with deep Pictou County roots. At nineteen, he joined the Royal Canadian Air Force. After several years as a radio technician, he enrolled in the Reserve Officer Training Program and studied Electrical Engineering at the University of New Brunswick. He was commissioned in 1957 and posted to the RCAF station at Cold Lake, Alberta. There he met Wendy McKeand, a recently immigrated Scottish teacher. They married in Wetaskiwin in 1961 and had two daughters, Elizabeth and Melanie. Air Force postings took them to Ottawa, Ramstein, Germany (4th Allied Tactical Air Force), Trenton, Greenwood, Halifax, and Brunssum, The Netherlands (NATO AWACS Procurement & Management Agency). While in Europe, Al and Wendy travelled extensively. Wanting a home base in a life that brought many changes, and already in love with Chance Harbour beach, Al and Wendy built a cottage there in 1971. Allistair constructed, plumbed, wired, fitted, and finished it himself. Decades of happy summers spent with friends and family followed, and many wonderful memories were created. Allistair was a loving, gentle and patient father, and a gentleman to everyone around him. He loved children and had a soft spot for any kid selling chocolate bars or needing a sponsor for a walkathon or some other fundraiser. Allistair developed his love of sailing and the sea as a child, mucking about in boats on the East River. He shared that love with Wendy and their girls, with many happy hours spent on their Signet-20 twin keel sailboat. Allistair raced dinghies, was a master of tactics and reading the wind, and taught his nephews to sail. He had an extensive knowledge and could be counted on to know the answers to the obscure clues in a New York Times crossword puzzle or a final Jeopardy! question, whether cultural, literary, geographical, historical or scientific. Allistair was a skilled woodworker and cabinet maker, building fine furniture and boats, and sharing that skill and knowledge with others. At Cold Lake, he organized a group to build a fleet of Windmill sailing dinghies, and in retirement built a 29-foot St. Pierre and Miquelon dory. Allistair was a founding member of the Pictou County Amateur Radio Club when he was still a teenager. When he retired from the Canadian Forces, he resumed his ‘ham’ radio activities as a member of the Dartmouth Amateur Radio Club, building and operating radio gear and talking to people on ships and around the world by voice and in Morse code. With the arrival of the Internet, he enjoyed years of researching family history. Serving on the Board of Managers and for a time as an Elder at Iona Presbyterian Church in Dartmouth, Allistair also helped with practical matters, bringing his knowledge of electronics to set up a sound system for the church, and contributing his woodworking skills where needed. In their final years, Allistair and Wendy moved to Parkland at the Lakes and then to Oakwood Terrace, where Allistair became well-known for his love of dancing; a silver lining to a diagnosis of Alzheimer’s disease, which has finally caught up to him. Allistair is survived by his daughters Elizabeth, Dartmouth, and Melanie, Stewiacke; his sister in law Nesta (Bentley) Haggart, Moncton, NB; his sister- and brother-in-law Margaret (McKeand) and David Cunningham, Scotland; and many nieces, nephews, grand-nieces and grand-nephews, and their families on both sides of the Atlantic. He was the last surviving member of his immediate family and was predeceased by his wife, Wendy (McKeand); his parents Robertson Stuart Haggart and Barbara Isabel Duff; his siblings and their spouses, Christine (Harold Cullen), Jean (Ivan Delong), Garfield (Aileen Dahr), Donalda (Lauchie Mitchell), Ian; Allistair’s twin Graeme; and several nieces and nephews. Our thanks to the kind staff and volunteers, past and present, of Oakwood Terrace, who cared for and supported Allistair over the past seven years; to our dear friend Gisele Chouinard, who for years regularly visited Allistair at Oakwood when we could not be there; and to the Iona Presbyterian Church community, who continued to remember and visit him. Burial will take place in a private service at Church Brook Cemetery, Little Harbour, led by the Reverend Dr. Cynthia Chenard. A celebration of life will follow at a later date at Iona Presbyterian Church in Dartmouth. Donations may be made in his memory to Oakwood Terrace Recreation Department, Iona Presbyterian Church or the Salvation Army.
See more See Less