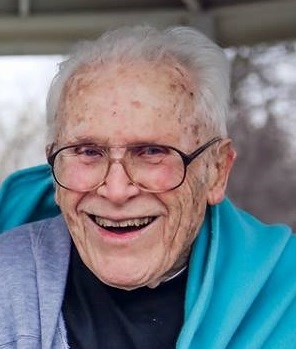 Dr. Earl D. Eyman, 92 of Bettendorf, Iowa went to be with Jesus on August 29, 2018. He was born in Canton, Illinois on September 24, 1925 to Arthur ‘Earl’ and Florence Hardin Eyman. Earl was the youngest of their three sons. Earl graduated from Canton High School in 1943 and received his under graduate degree education at the University of Illinois in Engineering Physics and a Masters in Mathematics. Earl enlisted in the United States Navy in 1944 serving through 1946 during World War II and was assigned to serve aboard the USS South Dakota in the Pacific Theater. He was privileged to be present and witnessed the Japanese surrender aboard the USS Missouri. Dr. Eyman was employed with the Atomic Energy Commission where he worked to develop the controls for the Nautilus, first atomic submarine. The Nautilus is now a museum located in Connecticut. While employed in McKeesport, Pennsylvania he met and married Ruth M. Morgan. They moved to Peoria, Illinois where Earl worked at the Caterpillar Tractor Company. At Caterpillar he developed remote control components to operate their equipment in dangerous environments and inclement weather conditions. Earl returned to college at the University of Colorado where he obtained his Ph D. in Electrical Engineering in 1966. Upon graduation he taught at the University of Iowa in the Electrical Engineering department for nearly 30 years and served as Chairman of the Department for 7 of those years. During this career, Dr. Eyman authored numerous text books and has lectured at many conferences throughout the world. He served the International Engineering organization Eta Kappa Nu as their International President. Earl attained his commercial pilots rating and traveled extensively with his family domestically and internationally. His primary hobbies included travel with family, hiking, mountain climbing, reading, history and skiing. His climbing experiences including an assent of the Matterhorn and hiking hundreds of miles of the Rocky Mountain ranges in Colorado. Earl was active and served his church communities in many roles over the years to include Sunday School teacher, Deacon, Trustee. Most recently he was a member of First Baptist Church in Davenport, Iowa. Earl was an active member of Hamilton Masonic Lodge No. 664 in Bettendorf, Iowa while his health allowed where he served his brethren as a Past Master. Earl was raised as a Mason in Canton, Illinois and was a former member of a Lodge in Estes Park, Colorado. Earl is survived by his wife of 67 years Ruth M. Eyman, their two sons, Joseph E. Eyman (Rebecca) and David J. Eyman (Ruth), three grandchildren, Aaron J. Eyman (Simone), Trenton D. Eyman and Nicara M. Snow (Eric George), six great-grandchildren, Joshua Eyman, Maximus M. Eyman, Zoe M. Eyman, Aaron J. Eyman Jr., Zachary J. Snow and Ryan E. George. He was preceded in death by his parents Arthur ‘Earl’ and Florence Hardin Eyman, his bothers James A. Eyman and Silbert L. Eyman. Visitation will be on Sunday, September 02, 2018 from 4:00 PM to 7:00 PM at the Weerts Funeral Home, 3625 Jersey Ridge Rd, Davenport, Iowa. The funeral service will be on Monday September 03, 2018 at 10:30 AM with a brief visitation period preceding the service from 9:00 AM to 10:00 AM at the First Baptist Church,1401 N. Perry St, Davenport, Iowa, with Pastor Rob White presiding. The internment will follow the funeral services with gravesite military honors at the Pleasant Valley Cemetery.
See more See Less