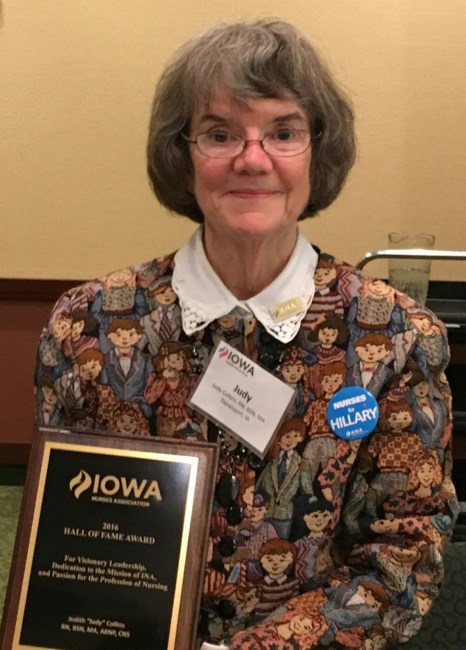 Judith Anne Collins, 76, of Davenport, passed away on Wednesday, July 31, 2019 in Davenport. Celebration of Judy’s life will be held on August 22, 2019 at 10 AM at Edwards UCC, 3420 Jersey Ridge Rd, Davenport. Visitation will be held on Wednesday, August 21st from 4-7 PM at Weerts Funeral Home, Jersey Ridge and Kimberly. Contributions in Judy’s memory may be made to Edwards UCC, Vera French Mental Health Center or the Alzheimers Association. Judy was born February 1, 1943 in Waterloo, Iowa, the daughter of Elizabeth (Stevenson) and Eugene Collins. After graduating from West Waterloo High School in 1961, she began her nursing career at the University of Iowa School of Nursing. While at Iowa she was a member of Chi Omega sorority, Angel Flight, Sigma Theta Tau nursing honorary, and played in the Scottish Highlanders. After becoming an RN she married Charles Honnold MD and moved to Portland, Oregon. She later moved with her husband and two sons to Muscatine, Iowa where she served as member and president of the Muscatine Board of Education and became active in the local Democratic Party. She later moved to Davenport to continue her career and care for her parents. Judy demonstrated excellence through her lifelong contribution to the field of nursing and her effect on the history of health care in Iowa. With persistence, wisdom, and foresight she mentored nurses, encouraging them to advocate for their patients and their profession to the fullest extent of their licensure. Judy held the office of President of the Iowa Nurses’ Association for two terms. A strong leader, she communicated effectively with members, the press and elected officials. She was selected for the American Nurses Association Legislative Institute in Washington DC. and was an active member of many health and legislative advisory committees for Iowa. She served as Director of Public Policy for the INA for many years. Judy was a tireless advocate for mental health care. After moving to Davenport from Muscatine she served as a Clinical Nurse Specialist for the Genesis Health Care System, helping all departments understand the mental health needs of patients. Later she returned to Genesis Psychology Associates as an ARNP prescriber. She was Director of the former Community Mental Health Center in Muscatine and a member of the Child/Adolescent Team at the former Scott County Mental Health Center now called Vera French where she also served on the Vera French Foundation board. A strong advocate for social justice, she was an advisor to the Iowa Medical and Classification Center (Oakdale), where prisoners are classified according to health and mental health needs. She advised the formation of the Scott County Mental Health Court, served as a member of the boards of the Mental Health Foundation and Community Health Care, served on the CPPC Council for Child Protection, and served on the faculties of St. Ambrose University and the University of Iowa. As president of the Iowa Chapter of the American Psychiatric Nurses Association Judy developed workshops on Trauma Informed Care and overall health. In honor of her decades of service to the INA and the nurses of Iowa Judy was awarded membership in the INA Hall of Fame in 2016. In recognition of her commitment to social justice and service to others, Edwards Congregational UCC gave Judy their “All My Relatives” award in 2017. Judy was an avid quilter and crafter, never knowingly passing a quilt shop along the highway. She treated her pets and plants with tender care and loved her friends at Edwards Church. Those who honor her memory include sons Jeff Honnold of Pittsburgh and Brent (Amanda) Honnold of Nevada IA, grandson Aidan Honnold of Pittsburgh, sister Sally (Todd) Tucker of Normal IL, brother Chuck of Bettendorf, members of Edward Congregational UCC and many healthcare professionals. She was preceded in death by her parents and former husband.
See more See Less

In Memory Of Judith Anne Collins