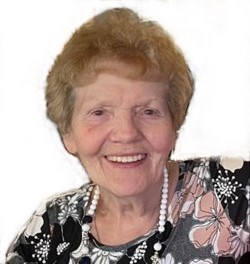 Siegrid U. Fuller, 83, of Davenport, passed away at her home on Saturday, January 21, 2022. Funeral services will be held at 1:00 p.m. on Friday, January 27, 2023 at Weerts Funeral Home. Visitation will be held from 12:00 p.m. until time of service. Burial will follow at the Rock Island National Cemetery. Online condolences may be expressed at www.weertsfh.com. Siegrid was born on July 20, 1939 in in Horkheim, Germany. She was united in marriage to Gerry Fuller on December 7, 1970 in San Jose, CA. He preceded her in death on August 22, 2015. Siegrid worked at Good Samaritan Nursing home, retiring in 2005. Siegrid and her husband Gerry relocated to Davenport in 1974 to raise their children Mark and Connie, after Gerry retired from the Army. Siegrid was known for making sure everyone left her home with a full stomach. She was a master at decorating her home and gardening flowers and growing vegetables. Siegrid was always impeccably dressed even if she was going to the grocery store. Her husband enjoyed providing accessories to complete her outfits and enjoyed spoiling Siegrid with gifts to show his love for her. Siegrid supported her children in the best way she knew how. She was a strong and loving mother who put her family's needs before her own. She is survived by her children, Mark Fuller, Connie Fuller, Jerry Bales, Diana Bales and Ralph Bales; grandchildren, Sydnee (Kiara) Harrison, Jay Fuller, Jeremy Bales; great-grandchildren, Jaymeson and Cash; one brother, Manfred Rohrbach. Siegrid was preceded in death by her parents; three siblings, Lotte, Otto and Oscar; and one son, James Bales.
See more See Less

In Memory Of Siegrid Ursula Fuller