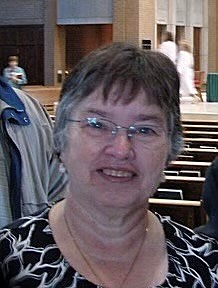 Carol A. Johnson, age 80 of Dayton, passed away Wednesday, September 21, 2022 at Bethany Village. She was preceded in death by her husband, George Johnson in 2020, following 60 years of marriage. She was also preceded in death by her parents, Bernard and Elizabeth Haywood and her brother, Capt. Lawrence Haywood. She is survived by her children: Lori Johnson of Dayton, Tim Johnson of NC, Terry (Diane) Johnson of Xenia, and Angie (Nick) Boerger of Centerville. Five grandchildren also survive her: Erin Johnson, Andy Boerger, Ian Johnson, Peyton Boerger and Calla Boerger, and a sister, Bertha Haywood. Carol was a loving and deeply dedicated mother and grandmother. She worked numerous jobs throughout her life including being a seamstress and most recently Gibson Greeting Cards until her retirement in 2001. Carol was an active volunteer at her children’s school including their girl scout and boy scout troops as well as the band boosters (Carrolleers) at Carroll High School. In her later years, Mimi (Carol) treasured her time with her grandchildren and found joy watching their sporting events, musicals, and many marching band performances. Mass of Christian Burial will be celebrated at Immaculate Conception Catholic Church, 2300 S. Smithville Rd. Dayton, Ohio 45420 on Tuesday, October 11, 2022 at 11 AM by Fr. Satish Joseph. Friends may call at the church one hour prior to the time of the Mass on Tuesday morning. In lieu of flowers, contributions can be made to either the Centerville High School Band Boosters at https://bit.ly/CBBDonate or the Carroll High School Music Department "Carrolleers" at https://www.carrollhs.org/giving/givetoday.cfm in Carol's memory. Fond memories and expressions of sympathy may be shared at www.tobiasfuneralhome.com for the Johnson family.2
See more See Less

In Memory Of Carol Johnson