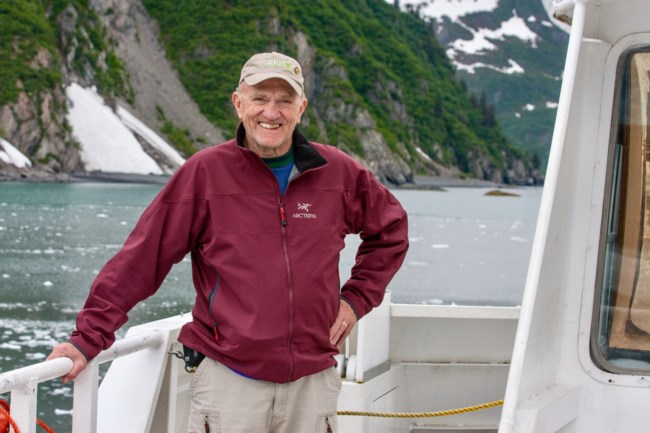 Jim Borgstrom was born in Chicago, Illinois. He was survived by his wife Marlene. Son Tom and his daughter Celia. Daughter Barbara, her husband Zach and their three children Mia, Sadie and Hugo. Daughter Karen, her husband Bill and their three sons Nathan, Jonathan, and Benjamin. Stepsons Alex and Chris Robinson and great grandson Grayson Robinson. Jim grew up in Chicago, where he helped his father with Wendella, the family tour boat business. He graduated from Senn High School in Chicago, class of 1953 and from Valparaiso University class of 1957. Jim was one of the founding members of Sigma Phi Epsilon fraternity at Valparaiso where he made many life-long friends. Jim was an avid runner, bicyclist, and triathlete. He was a member of the Board of Directors of Ohio River Road Runners Club, leading the club’s transition to modern electronic scoring. He completed the annual JFK 50-Mile running race in Maryland 20 times, the 745-mile Paris-Brest-Paris bicycle race and competed in a marathon race in each of the 50 US states. Jim lived life to the fullest and was always up for an adventure – a race, a hike, a bike trip – as long as he was moving and exploring. He and his wife Marlene enjoyed travelling; some big trips included biking across England and around the perimeter of Michigan as well as exploring each of the 50 states, often after he competed in a marathon. Jim had a rich and varied engineering career spanning from electronic system design at NCR and appliance development at Frigidaire, to manufacturing automation at Navistar and consulting on development of a runway lighting system in Egypt for the Air Force. Jim was an active member of Emmanuel Lutheran Church for over 40 years. Funeral service will be held at 11:00 am on Thursday February 2, 2023, at Emmanuel Lutheran Church, 4865 Wilmington Pike, Kettering, OH 45440. A light luncheon will be offered immediately after the service. The family will receive friends at Emmanuel one hour prior to the service. In lieu of flowers, donations in Jim’s name may be made to Emmanuel Lutheran Church Endowment Fund - Capital Improvements, to Emmanuel Lutheran Church, 4865 Wilmington Pike, Kettering, OH 45440 or https://my.e360giving.com/app/giving/emmanuellc. Online condolences may be sent to www.tobiasfuneralhome.com.
See more See Less

In Memory Of James Howard Borgstrom