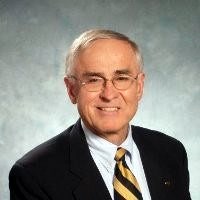 GALLAGHER, James Miller Age 86, of Dayton, passed away on September 3, 2021 at Hospice of Dayton. Born June 22, 1935 to Edward and Helen (Miller) Gallagher in Fort Wayne, Indiana, the youngest of three children. Brother Eddie, Jr. passed away as an infant, and his loving sister Beverly (Baker) currently resides in Northbrook, Illinois. Jim’s father was a career U.S. Army officer, so they moved often as a youth. His family moved to Kettering, Ohio, in 1949 and he graduated from Fairmont High School in 1953. In his senior year at Fairmont he met and started to date his future wife, Nancy Kuhbander. Jim was a proud graduate of the U.S. Naval Academy, class of 1957. He and Nancy were married in the Naval Academy Chapel on June 8, 1957, the day after his graduation. He visited the academy frequently over the years, and enjoyed staying in touch with his classmates. He had the opportunity to be commissioned in the U.S. Air Force and served with honor for a number of years, all at Wright-Patterson AFB, in Dayton. His Air Force career introduced him to his lifetime profession—program/project management. After his active duty time and a three- year venture in private industry, he transitioned to civil service and spent over 25 years in increasingly responsible positions, working on major Air Force missile and airplane programs. From 1986 to 1995, he served as the Director of the Center for Executive Development and Project Management, Soin College of Business and Administration, Wright State University, Dayton Ohio, where he developed, marketed and participated in the presentation of executive development programs for the business school. He taught project management and leadership courses in the management department. While at WSU he was introduced to and became an active member of the Project Management Institute (PMI) and was certified as a Project Management Professional, PMP. In January 2001, he began a six-year term on PMI’s International Board of Directors. In October 2009 he was designated as a Fellow of the Project Management Institute (PMI) for his significant contributions and sustained service to PMI and the project management community. This is PMI’s highest and most prestigious award that is presented to an individual. His additional educational background includes a Master of Public Administration degree from the University of Dayton, 1969. He was a lifelong learner, completing numerous continuing education courses. Jim was a member and past president of the Rotary Club of Dayton, a member and past president of the Criterion Club of Dayton, member and past president of the Dayton Council on World Affairs. He also was very involved with the University of Dayton Osher Institute for Lifelong Learning, and moderated and attended a number of courses. Jim had a love for travel, and the Naval Academy, Air Force and PMI Board activities allowed him to travel to many countries around the world. He had a particular passion for his Irish roots, visiting Ireland seven times, where he was able to visit the site of his Irish ancestors. Jim was an avid tennis player and played into his mid 80’s. He was a charter member of the Wright-Patterson Tennis Club and was a long time member of Virginia Hollinger Tennis Club in Oakwood, and thoroughly enjoyed his doubles matches. The loves of his life were his family--wife Nancy, his children and five grandchildren. He also had a special relationship with his Miniature Schnauzer “grand-dog”, Libby. He is survived by his wife Nancy and his children Tim (Patti) of Carlsbad, California and Mary Ankenbauer (Jerry) of Centerville, Ohio as well as grandchildren Anna, Jerry, Tim, Aaron & Bryce. In lieu of flowers the family asks that you donate to Hospice of Dayton, 324 Wilmington Ave. Dayton, Ohio 45420. Visitation will take place on Thursday September 9, 2021 from 5PM to 7PM at TOBIAS FUNERAL HOME, 5471 FAR HILLS AVENUE, DAYTON, OHIO 45429. The funeral Mass will take place Saturday September 11, 2021 at 11:30AM at INCARNATION CHURCH, 55 WILLIAMSBURG LANE, DAYTON, OHIO 45459.
See more See Less

In Memory Of James Miller Gallagher