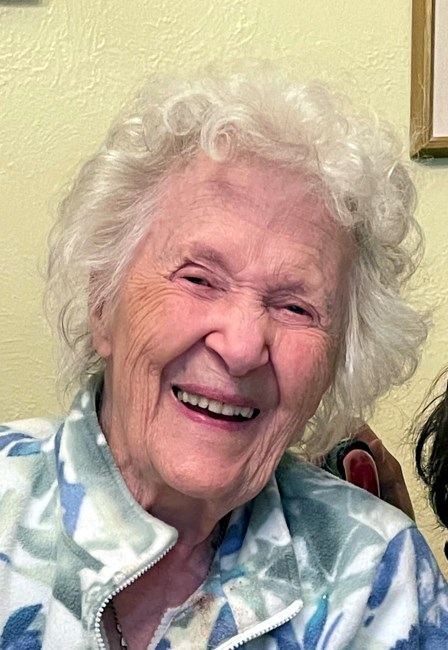 ANGERER, Rita E., age 98, of Kettering, Ohio passed away on Sunday July 31, 2022. Rita was born on October 12, 1923 in Ft. Wayne Indiana to Peter Thompson and Frances (Rolape) Thompson. She grew up in Dayton, Ohio and in January 1960, Rita married Robert V. Angerer (Bob), son of Paul Angerer and Elizabeth (Schweitzer) Angerer. Bob and Rita settled into their home in Kettering, Ohio where she lived for 62 years. Bob worked for NCR and when he passed away in 1974, she began working at Esther Price candies in order to support their 4 young children. She later worked as a home health aide working well into her 80s. After she “retired”, she continued to “work”, babysitting her grandchildren. Rita loved art, drawing, painting, and all children. Her beautiful smile would light up a room and children naturally gravitated to her and her loving presence. Besides being “Mom” to her own children, she was “Aunt Rita” to many nieces and nephews, and “Grandma” to her beloved grandchildren. Rita is preceded in her death by her husband, Robert V. Angerer; brothers: John and Jim Thompson and sisters: Mary Austin and Ann Wey. She is survived by her children: Bob Angerer Jr., Joseph Angerer, Peter Angerer, and Frances Angerer-Fuenzalida, as well as her grandchildren: Antonio Fuenzalida; Esther and Ruthie Angerer; George Angerer; and Stephen and Caleb Angerer. She is also survived by her kindred soul for life, her twin sister Rosalie Hoying. A visitation for Rita will be held Friday, August 12, 2022 from 4:00 to 7:00pm at Tobias Funeral Home – Far Hills Chapel, 5471 Far Hills Avenue, Dayton, Ohio. 45429. A Mass of Christian Burial will occur Saturday, August 13, 2022 at 10:30am at St. Charles Borromeo Catholic Church, 4500 Ackerman Blvd., Kettering, Ohio. 45429, followed by burial at Calvary Cemetery. Condolences may be sent to www.tobiasfuneralhome.com
See more See Less

In Memory Of Rita E. Angerer