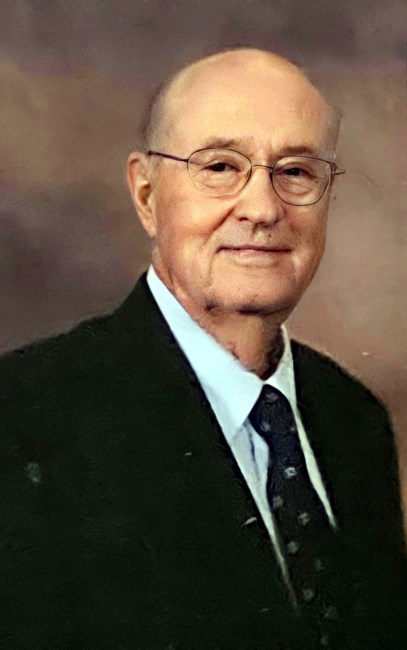 Fred Henderson, 93, of Decatur, passed away on Friday, July 29, 2022. Visitation will be on Tuesday, August 2, 2022, from 11:00 AM to 1:00 PM at First Bible Church. A celebration of life service will follow at 1:00 PM. He will be laid to rest at Roselawn Cemetery. Fred was born in Bradford, Arkansas. He joined the Air Force after high school, serving from 1946-1949. During this time, he obtained rank of sergeant. Fred attended the University of Central Arkansas and received a BSE degree. During this time he met his lovely wife, Dorothy Cameron. They were married for 69 happy years. While in college, he joined the Army Reserve Unit and was called back to the Army to serve in the Korean War. He served his country for 2 and a half years. While at the University of Central Arkansas, Fred belonged to Alpha Chi and served as president. He also served as vice president of the honorary organization, Pi Omega Pi. He later attended the University of Arkansas and earned his MBA. Fred worked 15 years for a major oil company. Then he continued his career at Spencer Co. in Huntsville, AL. He retired at 65 as Senior Vice President. During that time, he was a member of: Alabama Petroleum Marketers, National Oil Association, The Sales Marketing Club of Huntsville and Kiwanis Club of Decatur. Fred loved his wife and family. He loved the Lord and was a faithful member of First Bible Church. He enjoyed reading, tennis and fishing in his spare time. Fred was dearly loved and will be missed by all who knew him. Fred is survived by his two children, Laura Henderson Adcock and Kyle Henderson; one granddaughter, Kyla Henderson. In lieu of flowers, donations may be made to First Bible Church or Hospice of the Valley. Fond memories and expressions of sympathy may be shared at www.roselawnfhandcemetery.com for the Henderson family.
See more See Less

In Memory Of Fred Henderson