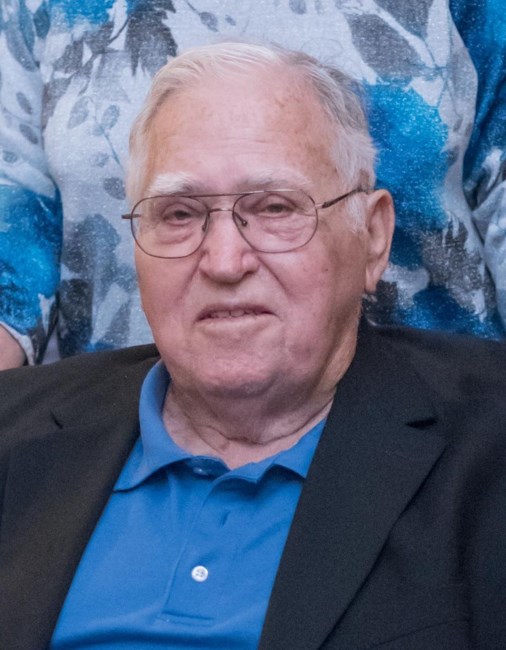 Lewis Harold Sharp was born in Oklahoma City, Oklahoma on October 28, 1933 and passed away on November 3, 2017 in Shenandoah, Texas. He was a 1953 graduate from Crooked Oak High School and on March 12th, 1954 he married Shirley Ann Calfee who he had known since the 3rd grade. Shortly after the wedding, he received that notification that his services were needed in the Army where he was stationed at Nike missile bases in New Jersey. Following his honorable discharge from the Army, Lewis went to work for Southwestern Bell in Oklahoma City where he spent the next 35 years. In retirement, he and Shirley bought a motor home and kept busy traveling the country with family and friends and following the grandchildren’s dancing, band, cheerleading, softball, and anything else the grandchildren might have been involved with. If the grandkids were doing it, he was going to try to be there to see it. They belonged to the Oklahoma chapter of the Telephone Pioneers Family Campers. When he wasn’t traveling, he was working or “piddling” in his woodworking shop always building something for family, friends, or his neighbors. After living in the Del City/Midwest City area for over 70 years, in 2015, he and Shirley decided to move to The Woodlands, Texas area to be near their son David and his family. They built a new home less than a mile from both David and their grandson Daniel. Lewis’ faith has always been a central and controlling part of his life. He and Shirley were charter members of what was then Meadowood Baptist Mission which met in the Midwest City YMCA and later Cleveland Bailey Elementary School before moving to the current location as Meadowood Baptist Church. After over 50 years and the move to Texas, they found a new church home at Crossroads Baptist Church in The Woodlands. Lewis was preceded in death by his parents O.W. and Marie Sharp and his brother, Charles David Sharp. He is survived by his wife Shirley Ann Sharp, brother Robert Lee Sharp of Jenks, Oklahoma , 2 sons- David Wayne Sharp and his wife Patti Suttle Sharp of The Woodlands, Texas and Richard Earl Sharp of Newalla, Oklahoma , 4 grandchildren- Leslie Marie Sharp, Daniel Lee Sharp and his wife Savannah Dore Sharp of The Woodlands, Texas, Bridgett Sharp Jones and her husband Justin Jones of Cape Girardeau, Missouri, and Stacy Sharp Ouellette and her husband Steve Ouellette of Oklahoma City and 3 great-grandchildren -Addison Kate Jones, Easton Cole and Evelyn Jaclyn Ouellette. And another great-grandson Daniel Lee Sharp Jr. expected in January 2018.

In Memory Of Lewis Harold Sharp