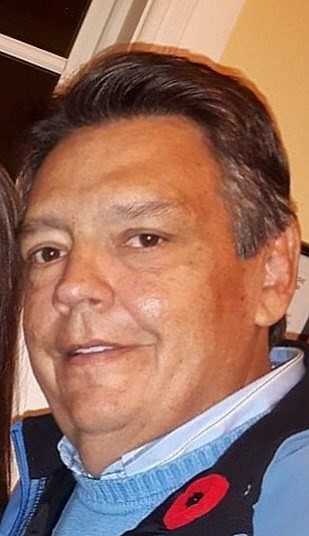 On Thursday, May 28th, 2020, the Lord called one of His faithful servants home, knowing that his battle on this earth was growing more tiresome. Marc Douglas Phillips, 59, of Cornwallis Park, loving husband, father and Grampie, passed away suddenly at home from complications of heart and kidney disease. Marc had a passion for the Gospel, and a desire to share it with those around him, whether it be family, friends, his medical team, or strangers he was about to get to know. He served as Pastor of Ashmore Bethel Baptist Church in Ashmore NS for the past number of years, where his congregate came to know and appreciate his style of delivering God’s messages. The Covid19 pandemic meant getting those messages out in another way, therefore Marc took to social media to spread God’s word, reaching beyond the structured walls of a building and touching more souls. Prior to ministry, Marc was the General Manager of Annapolis Basin Conference Centre, an entity born of the former CFB Cornwallis Park. His work was fulfilling there, and challenging at times, and it pleased him to be part of a team who shared the same vision of reviving this community. He always said “surround yourself with good people, show respect, treat them kind, and your job as a manager will be easier.” However, once ‘the call’ was placed upon his heart, Marc retired to more freely focus on his ministry. Marc enjoyed simplicity in his life, choosing to focus on what was always important to him, his loving God and family. His daughters, who still called him for advice or ‘just to chat’, and his grandchildren, who he loved dearly, were shining jewels in his heart. Finding love, and building a life together with his soulmate, wife Esther, was a journey they were on together, creating a story of many chapters, and building memories that we’ll all hold tight in our hearts. Marc’s fur baby, a 9 mo old golden name Maudie, will miss the bond the two of them had. Without doubt, she was his therapy puppy. By nature, Marc was quiet, and very much a gentleman, a deep thinker and knowledgeable of so many topics. He always enjoyed some friendly competition in trivia, pool, snooker, basketball, cribbage, darts, and the many scrabble games he and Esther would play. Though he liked watching sports, he especially enjoyed the game of golf, playing whenever he was able, with his brother, friends and acquaintances. Marc’s quick wit, off the wall humor, and corny jokes made us laugh often, and gave pause to his grandchildren to send a look his way and then ask “is that right Mom or is Grampie fooling?” Born in Digby, Marc is survived by his wife Esther, a partner of 21 years, his daughters Lorelei (Atlas), Erica (Duston) and Courtney (Dave), his grandchildren Isabella, Isiah, Alexis and Avery. As well, by his mother Evangeline Head, sister Tanya Wambolt, brothers Rodney and Michell. He was predeceased by his father Gilbert Phillips of Kahnawake, special aunt Audrey ‘Tody’ VanTassell, grandmother ‘Nanny’ Irene Ruggles. Special thanks to his nurses and doctors, and all medical staff, in the Renal Dialysis Unit at Yarmouth Regional Hospital, who took excellent care of him during his treatments. He formed many relationships during his time there, and spoke highly of the professionalism and passion the staff had for their patients. Cremation has taken place under the care of Jaynes Funeral Home in Digby. Celebration of Marc's life will be held 11 am, September 12, from Champlain Hall 178 Haida St. Cornwallis Park, Nova Scotia B0S 1H0. Donations in Marc’s memory can be made to the Renal Dialysis Unit at Digby General Hospital, Ashmore Bethel Baptist Church c/o 1349A Sissiboo Road, Weymouth NS B0W 3T0, or any charity of choice. Enjoy your heavenly rewards Marc, you have earned them. We will have a great reunion someday. “...when you saw only one set of footprints, it was then that I carried you” Share a memory or leave a condolence at www.jaynesfuneralhome.com
See more See Less

In Memory Of Marc Phillips

A Celebration of Marc's Life