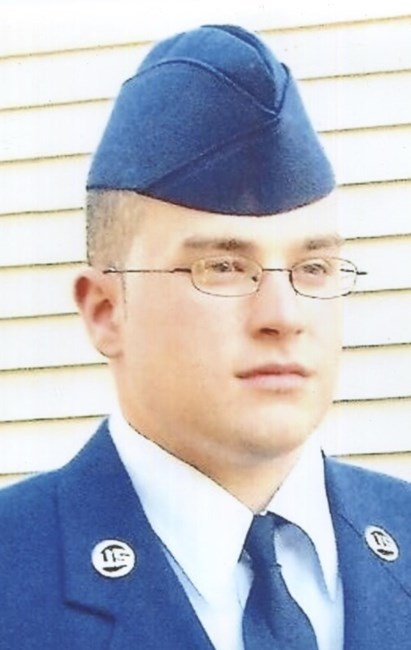 Dominic Chase Marino, 30, of East Hartford, passed away in his home November 18, 2018. He was born July 23, 1988 in Hartford to the loving Mark Marino and Robin (King) Marino. At a young age Dominic knew he wanted to be in the Air Force. He served his country proudly and traveled the world. He was based in Guam and was sent to South Korea, Kuwait, Japan, Turkey and Germany. He was awarded Airman of the Quarter 5 times and was Airman of the Year once. He sustained injuries serving his country and left the service as a Disabled Veteran. Dominic spent time volunteering at the VA and he truly felt a sadness that he couldn’t continue to serve active duty. Dominic loved sports, especially the New York Yankees. He was a gifted athlete and worked hard at being the best he could be. He was highly competitive and would take on any challenge big or small. He loved taking his dog for long walks in the woods. Dominic loved kids and spent as much time with nephews and nieces as possible. He had a special bond with kids because deep down inside he was still one himself. He was Iron on the outside and a softy on the inside, which his family and friends knew about him. He would light up a room when he came in. He was truly a good soul and had lots to be proud of. He was all about God, Country and Family. He would fight and defend to the end all of the things he believed in. He lived a simple life and spent most of his time reading or spending time with his family. He loved his grandparents and spent many evenings with them. He had a special relationship with his father’s grandson Noah, he truly adored him. Dominic will be missed by his father Mark Marino and his wife Glorivee Feliciano, his mother Robin Marino and her boyfriend Keith Miller, his grandparents Leonard (Dziadzi) And Elaine (Grandma) Kostek, and Laurence Marino, his brothers James King and Vincent Marino, step siblings Kyle, Kyla, Keven Centeno. He also leaves his uncle Robert King, aunts Cheryl King and her boyfriend Carlos Gonzale and their children Tyler, Shayla and Ryan Gonzalez, Leah King and her children Liliana, Dante and Angel who were a very important part of his life, aunts and uncles Michael and Christine Marino, Lauri Marino, Louis and Monica Marino. He is predeceased by his Grandmother Dolores Serignese. Services for Dominic will be held Tuesday, December 4, 2018 beginning at 11AM with a brief period of visitation followed by a funeral service at 11:30AM at Newkirk and Whitney Funeral Home, 318 Burnside Ave., East Hartford CT. Burial will follow immediately in Connecticut State Veterans Cemetery, 317 Bow Lane, Middletown. Calling hours will be Monday, December 3, 2018 from 4-8PM at the funeral home. For more information or to leave an online condolence, please visit www.newkirkandwhitney.com
See more See Less

In Memory Of Dominic Marino