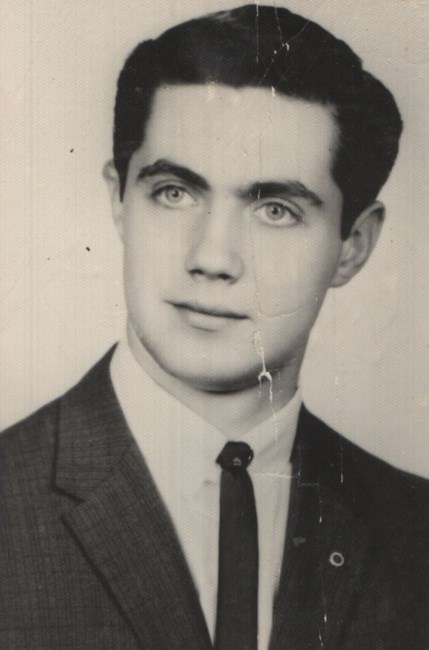 David Roy Decker (78) of East Lansing, Michigan, passed away at home surrounded by his family on January 18, 2023 from angiosarcoma, a rare form of cancer. Dave was born in Lansing on June 25, 1944, as the oldest child and only son of Floyd and Frances (Starr) Decker, who preceded him in death. He is survived by his sister Carol (Tom) VanIwaarden. He graduated Everett High School, class of 1963; and enlisted and was honorably discharged from the United States Army in 1964. He married his soul mate, Geneva (Hawley), on September 30, 1967 after meeting at Topps Department Store, where they were employed. Together they forged a life and strong family that sustained them through their 55 years of marriage. The grief of losing such a fun-loving and helpful soul will be felt by many. He’ll be lovingly remembered and eternally missed by Geneva; his two sons, Joe (Nicole) Decker of Munith and Jon (Neneth) Decker of Bath; his daughter Amy Decker of East Lansing; and his embraced daughter Serena (John) Lake of Petoskey. As much as Dave loved his wife and children, his greatest joy was interacting with his grandchildren and great grandchildren: Randi Decker (Vladimir and Azazel Torres-Abrego), Kevin (Katie and Bowen) Decker, Maddie Schultz (Aaron Trudeau), Nichole Pancho, Michael and Brandon Keel, Kayden and Bryson Decker, and Henry and Erin Lake. Dave was a dreamer, a traveler, an independent force that rebelled against conventional thinking, a seeker of mischief and a champion of what ever brought smiles to the faces of those he loved. After regaled stories of his precocious childhood, adventurous youth and extensive travels (which he shared often) he was known for saying, "If I dude it, I get in trouble. If I don't dude it, I don't have no fun...I dude it!" This was always followed by a huge grin and a belly laugh because it was unapologetically his approach to everything in life. Dave had an entrepreneurial spirit that led to owning several businesses over the span of his life. Whether it was catching fish and selling them to Lansing locals at the age of 8 or starting an expediting delivery service at the age of 61 he was willing to pursue the adventure of it all. He was fortunate to retire from both his passions. First, being a developer, contactor and builder...just like his dad; and then later retiring from Classic Firearms as a munitions expert. Both are hallmarks to his legacy of hard work, dedication and protection over everyone he loved. He enjoyed hunting and fishing, attending church as a life-longer member of Pennway Church of God, going to family reunions and playing cards with friends. However, nothing was more cherished than spending time with his family at Houghton Lake, camping in Michigan, traveling to places like Yellowstone, the Badlands, the Grand Tetons and Acadia, weekly Sunday meals, his birthday seafood boils and every single celebration imaginable. In his last few weeks he would watch a digital picture frame where photos of his family perpetually rotated. New ones were added regularly to share with him the discoveries and adventures he could no longer experience first hand. With a content smile he watched as intently as if he was emmersed in his favorite Western movie. He was truly a man of family and faith. The gratitude of his family for those who provided encouragement, said prayers or helped out in any way during his 2 year battle is what prevents them from being overwhelmed by grief. Emmence love and appreciation to his sister and brother-in-law Chris and Bill Sheldon and neighbors who have become dear friends. The family gives high praise to Sparrow Hospice and the doctors and staff at U of M and Red Cedar Oncology for their skill and encouragement in not letting Dave's spirit give up before his body gave in during the fight for his life. More than anything, the family gives thanks to God for a husband, dad, grandpa and papa who loved life and them beyond measure. Celebration of Life Visitation and Service will be held, with details communicated via family members' social media. Contributions may be made to Ronald McDonald House or Pennway Church of God in memory of Dave.
See more See Less

In Memory Of David Roy Decker