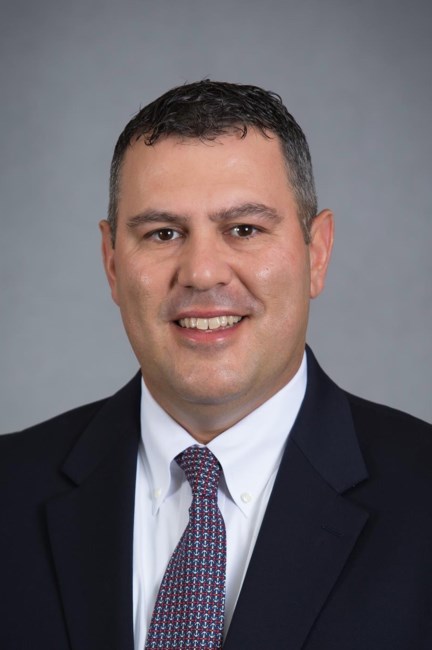 James (Jim) Pignataro, of Okemos, Michigan passed on to his eternal reward on August 26, 2021, at the age of 49, after a courageous six-year battle with cancer. Born January 7, 1972 in Queens, New York to Roger and Linda Pignataro, Jim grew up in Raymond, Maine and graduated from Gray-New Gloucester High School in 1990. In 1994, he earned his bachelor's degree in interdisciplinary business administration/economics at the University of Maine at Farmington, where he was also a multi-year varsity letter winner in baseball. Jim went on to earn his master's degree in athletic administration from the University of Tennessee in 1995 where he found his passion for working with student athletes. Jim began his professional career at Florida State University before moving to Michigan State University, where he worked in the athletic department for 25 years. He spent the majority of his career as the Executive Associate Athletic Director for Student-Athlete Services, where he was dedicated to the overall care of student-athletes. With integrity, dignity, respect and compassion as his guiding principles, Jim influenced hundreds of student athletes who have gone on to pursue careers both in and out of sports all over the world. His living legacy is realized through all those he guided and mentored. Jim’s service to his profession extended beyond East Lansing. In 2014 he served as President of the National Association of Academic and Student-Athlete Development Professionals. The organization honored him in 2016 with the Lan Hewlett Award, which acknowledges distinguished service in the field of student-athlete academic and personal development. Central to Jim’s daily life was his steadfast faith in God and an unwavering love for his wife Alana and their children Ali and Jimmy. Through their shared love of sport, Jim spent many happy family moments watching Red Sox baseball, rooting for MSU, and cheering at Ali’s volleyball matches and Jimmy’s baseball games. He will forever be their biggest fan. Jim’s love for a wide community of family and friends was marked by his infectious laugh and his signature homemade pasta “sauce.” He always took time to care for others, meeting at Dunkin Donuts or breaking bread at a local restaurant. He supported local schools and organizations through service, coaching and mentorship. Jim was a devoted member of the River Terrace Church in East Lansing, where he often volunteered in a leadership capacity. Jim shared unwavering faith, hope, reflections and prayer with family and friends during his journey with cancer, reminding us always that God holds us “In His Grip.” Jim is survived by his loving wife of 20 years, Alana Inkala Pignataro, an elementary school teacher at Okemos Public Schools; daughter Alison (16) and son Jimmy (13); parents Roger and Linda Pignataro of So. Burlington, Vermont; sister Nicole and husband Dr. Moise St.Louis of Mattapoisett, Massachusetts; Aunt Virginia and husband Dr. Joe Valentino of Lexington, Kentucky; Uncle Dino Pignataro and wife Judy of San Francisco, California; mother-in-law Darlene Inkala of Okemos, Michigan; sister-in-law Laurel Miller and husband Caleb of East Lansing, Michigan; nieces Ella, Bella, Alexa, and nephew Stefan. Jim is predeceased by his paternal grandparents, Ralph and Esther Pignataro, maternal grandparents Charles and Mary Waitkunas, and father-in-law Al Inkala. A public celebration of Jim’s life will take place outdoors adjacent to the Clara Bell Smith Student-Athlete Academic Center on the MSU campus on Wednesday, September 1, 2021 at 7:00 p.m. Guests are invited to park in Lot 79 south of Spartan Stadium and enter the football practice field through the gates on Shaw Lane. A memorial service with limited capacity for family and close friends will take place on Thursday, September 2nd at 11:00 a.m. at the River Terrace Church (1509 River Terrace Drive in East Lansing, MI). In lieu of flowers, memorial contributions may be made to the Jim Pignataro Memorial Fund through the Michigan State University Federal Credit Union to support the future educational expenses of his children and for charitable contributions to support lymphoma research. Fond memories and expressions of sympathy may be shared at www.greastlansing.com for the Pignataro family.
See more See Less

In Memory Of James Roger Pignataro