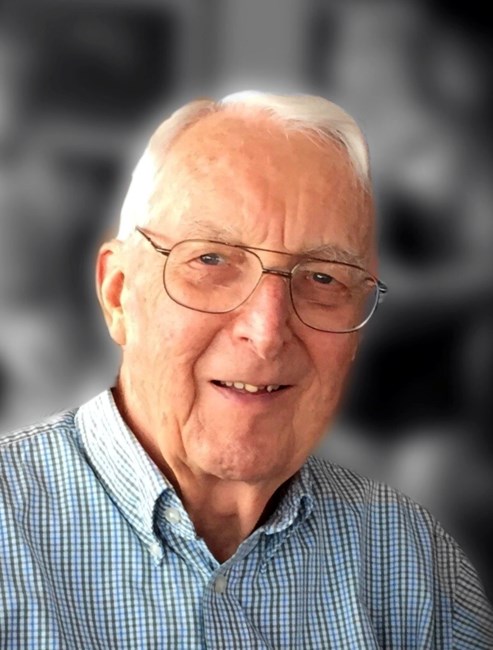 John passed away at home surrounded by his loved ones on June 13, 2020. John was born in Lansing and spent his entire life in the East Lansing area. He attended Michigan State College before enlisting in the U.S. Navy aboard the USS Antrim during WWII. Upon being discharged from the service and completing his Bachelor of Science in Mechanical Engineering, he began his career at Auto Owners Insurance, which spanned 41 years. John started out as their Building Engineer and Manager of Maintenance, earned his Real Estate Alumni of Michigan designation, and was steadily promoted over the years, retiring in 1991. His positions included Manager of the Mortgage Loan Department, Assistant Vice President of Real Estate and Service Division, and Executive Vice President, Secretary and Treasurer. He also served on the Board of Directors until 1996. John was a strong supporter of his communities, and active in many civic organizations, including the Parkwood YMCA, The Peoples Church, and Habitat for Humanity. Favorite pastimes included woodworking, building projects, collecting antique clocks, gardening, and following his Spartans. John was also a nature enthusiast and loved wildlife and bird watching. But by far, traveling with his entire family over many years, and spending time at his beloved Crooked Lake, brought him the most pride and enjoyment. John is preceded in death by his loving wife of 64 years, Carrie Irene. Surviving are children, Betty (Tony) Sinicropi of Lansing, Stephen (Kipo) Wales of Gardnerville, Nevada, Jeffrey (Amy) Wales of Frankenmuth, Mary (Arthur) Guzowski of Bath, and Linda (John) Donohoe of Williamston. Grandpa-Great Grandpa will be greatly missed by Tony (Allyn), Patrick (Natalie), Kayne (Samantha), Kendal, Sarah (Jimmy), Austin (Sophie), Carrie, Nathan, Alania, and Danny. In addition, he was loved by many nieces and nephews. A private graveside service is planned, with a celebration of John’s life to be held at a later date. For those wishing to honor John through a donation, the family suggests The John and Carrie Wales YMCA Endowment Fund or The Peoples Church, East Lansing. Share memories at www.greastlansing.com
See more See Less

In Memory Of John Rock Wales