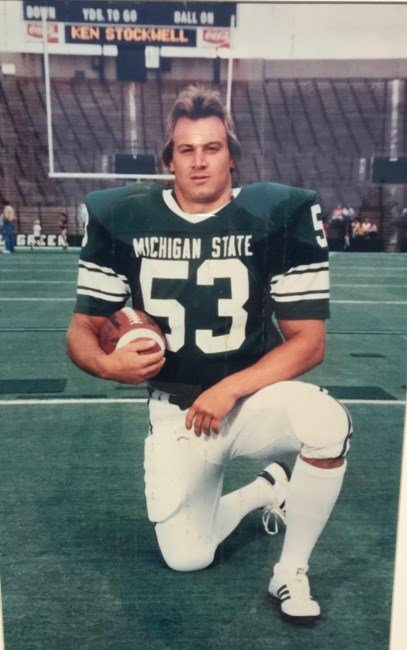 Ken Stockwell was active in the community. He was President of his own real estate and development company that we all know so well, Stockwell Real Estate Group. George Eyde, who played football for Michigan State, recruited the young Spartan who was an Advertising Major at the time and the strong center for our Spartans, to begin a career in real estate. He knew that Ken was a natural at sales with his gregarious personality and natural charm. Ken was paramount in the revitalization of Downtown Lansing and surrounding areas – even winning the Revitalization Award in 2004 awarded by the mayor for his retail and loft apartments. He opened Stockwell Construction Company and built upscale residential condos – Autumn Park with private elevators. Ken was active in the Society of Industrial Office Realtors (SIOR) and soon to be president. Ken grew up in Grosse Pointe, MI and was born to Robert Glen Stockwell and Marilyn. He was one of three Stockwell boys. His brothers were Robbie and Chuck. The boys spent summers waterskiing and boating down Lake St. Clair and later in Petoskey on Walloon Lake. Ken loved his Grosse Pointe roots and was always a Detroit boy at heart. His father was a member of the Detroit Athletic Club and always made time for Detroit sporting events. Ken was a naturally gifted athlete but chose to specialize in football. He was recruited and given a scholarship to University of Connecticut. He enjoyed his time out east but made a decision to transfer to Michigan State where he soon became the center of the football team and awarded Big Ten Player of The Week as well as a football scholarship. Stockwell was a coach’s dream and believed he could accomplish anything he put his mind towards. Vince Lombardi quotes remained on his desk. He was one of the most positive people you would ever meet and carried that attitude with him for the duration of his life. He remained part of the MSU Varsity Alumni Club. While at MSU he met Lori in typing class. Ken and Lori married and had two daughters, Susan Ashley and Lindsay. Ken loved his two girls more than anything in the entire world. They were his pride and joy. Stockwell was everyone’s best friend. He cherished his relationships and his friendships. He treasured all the time spent with everyone close to him. Stockwell had so many interest and hobbies – too many to even list. Some of which ranked high on his list and ones in which he was devoted included hunting, fishing, traveling, boating, golf, tennis, most athletics, and recently ball room dancing with Amanda Hopper. He shot a moose in Alaska, Elk in Scotland, and, according to Ken, the world’s largest sailfish in Mexico – all of which were mounted with great satisfaction. He was an active member in Ducks Unlimited. Stockwell belonged to many clubs, bible studies, and volunteered as a football coach for J.V. and Varsity at Okemos High School. Ken and Dr. Steven Powell volunteered to coach his younger daughter’s soccer team at St. Martha School and Parish, and was so proud when the Miracles team finished the season undefeated. Everyone knew Ken was the life of the party and that there was never a dull moment when he was around. He touched so many lives and had a positive impact on many. He was a living legend and a local hero. Sparty On, Ken Stockwell! In lieu of flowers, please make donations in memory of Ken Stockwell to Spartan Fund with Spartan Athletics at www.spartanfund.net, make a one-time donation to Kids in the Game at www.kidsinthegame.org/donate, or to Cardiovascular Research Foundation at www.crf.org. Visitation at Gorsline Runciman East Chapel, 1730 E. Grand River, East Lansing, Saturday 2-6 p.m. and at The Peoples Church, 200 W. Grand River, East Lansing, Sunday 1:30 p.m. until memorial service at 2:30 p.m. Memories and condolences may be shared at www.greastlansing.com
See more See Less

In Memory Of Kenneth B. Stockwell