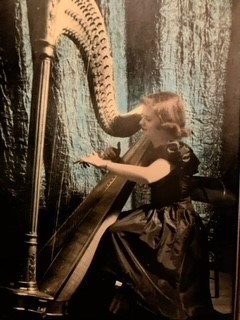 Our beautiful Mother, Lauralee Campbell went to play her harp with the angels on Thursday January 19, 2023. She was born July 13,1932 in Indianapolis, Indiana, where she was raised by her parents, Tyree and Josephine Burke. As a child she played the piano, but switched to the harp, which became her life's direction. Lauralee loved school and was a valedictorian of her graduation class at Shortridge High School. She continued her education at the Eastman School of Music, where she played Harp in many of the school's organizations, including the famous Wind Ensemble. At Eastman, she met her future husband, Douglas Campbell, a horn player. They married, and after they left Eastman, they moved to East Lansing, where Doug was teaching at Michigan State University. Doug & Lauralee raised 3 children, whom they bravely traveled with all over Europe and the U.S. They also spent summers at the New England Music Camp in Maine, where they taught Horn and Harp. Lauralee continued to teach the Harp privately and eventually at MSU, and sent many talented Harpist into the world. She played for many years in the Lansing Symphony Orchestra, as well as the Grand Rapids, Kalamazoo, and Battle Creek orchestras,and was and was a trooper, dragging the Harp in the middle of Michigan Winters to those destinations. She had a passion for travel and worked for many years at Spartan Travel, Classic Travel, and Group Travel Experiences, which facilitated her joy of traveling the world and enjoying other cultures. She also planned and escorted many touring trips for local musical organizations, especially the MSU Alumni Band. She enjoyed singing in the St. Thomas Aquinas choir, and even planned and escorted that group on their singing tours. State Capitol's were also her thing- she visited most of them, and she spent many years as a docent at the Michigan State Capitol. Lauralee loved cats, and there were always on or two that could be found lounging around her house. She had joy for life and a wonderful sense of humor, which she kept through her last five years in the Burcham Hills Memory Care Unit, and to the end. She is survived by her 3 children, Cheryl (Jim) of Cambridge, MD, Doug( Lori) of Mason, MI, and David (Miriam) of Mundelein, IL, and 4 grandchildren, Adam, Chad, Aaron, and Matthew, and 10 great grandchildren. Celebration of Life will be held at a later date. In lieu of flowers, please raise a glass and toast to a wonderful life lived. Fond memories and expressions of sympathy may be shared at www.greastlansing.com for the Campbell family.
See more See Less

In Memory Of Lauralee Burke Campbell