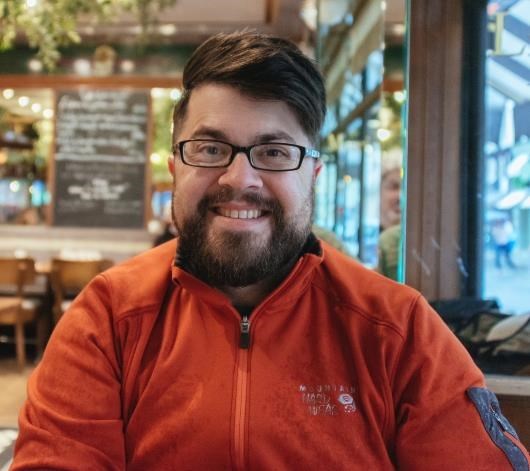 Surrounded by his loving family and close friends, Cameron Andrew Coker went home to be with his Lord and Savior, Jesus Christ on Thursday, March 11, 2021 following a tragic automobile accident. Cameron was born on November 27, 1984 in Chattanooga, Tennessee to Joseph "Corky" and Theresa Coker. Cameron was a graduate of McCallie School class of 2003, and Carson Newman University class of 2007, where he attained a Bachelor of Science degree in Computer Information Systems. Soon after college, he was employed servicing computer technology for US Congressmen in Washington DC. Cameron then became a "Genius Level" Apple computer advisor while working at Apple Computer in Knoxville. Because of his love of collector cars, Cameron made the decision to move back to Chattanooga and join his family’s businesses, Coker Tire Company, Honest Charley Speed Shop, and Chestnut Properties LLC. In 2018, Cameron became the Director of Honest Charley Speed Shop and the Coker Museum. During this period, he also used his gifts with photography in serving at Calvary Chapel Chattanooga as well as in his own business. Cameron met the love of his life in 2012 while serving with her at Calvary Chapel Chattanooga ministering in the youth department. Hillary Twomey and Cameron were married in 2018 and were both faithful in serving their Savior by shepherding and mentoring young students. Telling others about Jesus was something Cameron was passionate about. Whether you were a friend or stranger, Cameron would show Christ's love through his laughter and quirky wit. He was a dedicated and loyal husband, father, son, brother and friend. He committed a year of his life to the Calvary Chapel Renew Ministry at Farm 58 in Dunlap, TN. Cameron was very active in international missions traveling to Israel, France, and the Dominican Republic. Cameron also gave the gift of life in his passing by being an Organ donor. He was an Eagle Scout, a gifted photographer, world traveler, and Ocoee river raft guide. Cameron lived large and greatly loved the outdoors, backpacking and snowboarding. Just as his dad and grandfather, he loved collector cars. Cameron competed in the coast to coast Great Race car rally with his father from age 12 to age 19 as navigator for Team Coker. Cameron was preceded in death by his grandfathers, Harold Coker and Adam Mondl, his grandmother Millie Mondl, his uncle Col. Mark Mondl, and cousins Dr. Jeff Ligon and Jason Thomas Coker. He is survived by his loving wife, Hillary Coker, and 3 month old son Thomas Elliott Coker both whom he adored. He is also survived by his grandmother, Lillian Coker, dedicated parents Corky and Theresa Coker, loving in-laws Mike and Dee Twomey, adoring sister Casey (Jacob) Jarvis, twin nephews Joseph and Benjamin, niece Violet, sister in-law Taylor Twomey, and his many cousins, aunts and uncles. The family will have a private graveside service. The public is invited to a Celebration of Life service on Wednesday, March 17th at 11am at Calvary Chapel Chattanooga (3415 Broad Street). In lieu of flowers, the family asks that the community and friends please consider a gift to The Cameron Coker Memorial Fund, supporting Christian missions. Checks payable to The Coker Foundation, a 501(c)(3) may be sent c/o Pendleton Square, 832 Georgia Avenue Suite 210, Chattanooga, TN 37402. Arrangements are by the East Chapel of Chattanooga Funeral Home, 404 South Moore Road, East Ridge, TN 37412. Please share your thoughts and memories at www.ChattanoogaEastChapel.com.
See more See Less

In Memory Of Cameron Coker