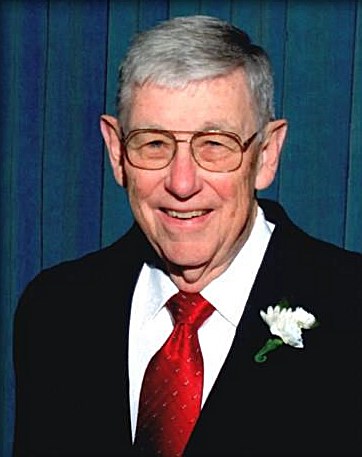 Howard Ferrell of Oklahoma City, Oklahoma, passed away peacefully at Epworth Villa on April 13, 2022. He was 93. Howard was born April 11, 1929, to loving parents B.O. and Eva Ferrell, in Shreveport, Louisiana. Shortly following his birth, he moved to Houston, Texas, with his parents, where he grew up and graduated from Lamar High School in 1947. After his graduation, he attended Baylor University before transferring to Oklahoma A&M (Oklahoma State University) and graduated with a B.S. in Mechanical Engineering. Howard then accepted a commission into the U.S. Navy, where he served aboard a ship based in Newport, Rhode Island, and met his bride, Marianne Shea, to whom he was married for 47 years until her passing in 2001. Following his tour in the Navy, Howard returned to Oklahoma State University, where he earned a Master of Science in Mechanical Engineering while serving in the Naval Reserve. He continued his education at Texas A&M University, earning his Doctor of Philosophy degree in Petroleum Engineering. Howard then accepted a position as a production research engineer with Conoco in Ponca City, OK, where he and Marianne raised their three children: Karen, Shea, and Helen. Retiring from Conoco in 1985, Howard and Marianne moved to Tulsa, Oklahoma, where he was employed as a consulting engineer for Keplinger and Associates until 1994. He was devoted to his family, and he was affixed to everything his kids and grandchildren were involved in; Camp Fire, Boy Scouts, dance and piano recitals, band, track, and swimming. In their retirement, he and Marianne also enjoyed traveling with their grandkids. In 2006 Howard met and married Peggy Starkey. The couple lived in Tulsa before moving to a retirement village in Edmond, Oklahoma. They enjoyed traveling together extensively in their retirement. Howard enjoyed being a member of Crossings Community Church, Military Officers Association of America, Sons of the American Revolution, and Society of Petroleum Engineers. He was awarded the prestigious title of Pioneer of Enhanced Oil Recovery by SPE. Howard is predeceased by his parents, B.O. and Eva Ferrell, and wives, Marianne and Peggy. Survivors of the family include his brother Harold W. Ferrell of Columbia, TN; children: Karen Young of Edmond, OK, Shea Ferrell of Tulsa, OK, and Helen Lundeen of Lynchburg, VA; grandchildren: Sara Chown of Edmond, OK, Michael Young of Evanston, IL, Ryan Ferrell of Tulsa, OK, Scott Ferrell of Myrtle Beach, SC, John Lundeen of Eugene, OR, David Lundeen of Suwanee, GA, and Mary Lundeen of Temple, TX; 9 great-grandchildren: Austin Chown, Emma Chown, Conor Young, Iain Young, Emmet Young, William Ferrell, Claire Ferrell, Luke Ferrell, and Jack Lundeen; spouses of his children and grandchildren: Ken Young, Robin Ferrell, Calvin Lundeen, Ben Chown, Carolyn Young, Wynter Ferrell, Amy Ferrell, Samantha Lundeen, and Lindsay Lundeen.
See more See Less

In Memory Of Howard H. Ferrell