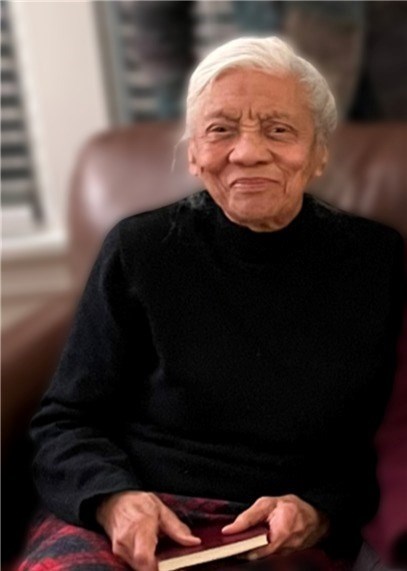 Daphne was born in Saldanha Bay, South Africa on April 13, 1934, to Betty and Tom Daniels and passed January 14, 2023, at Edmonton, Alberta. She was predeceased by her parents and four siblings, Leonard, Olga, Clifford and Adolf. When Daphne was a small child, she required surgery which necessitated the family moving to Cape Town where Daphne’s father obtained work on a fishing boat. When Daphne was nine years old, her father lost his life in a storm while out fishing. Difficult years followed for Daphne’s mother Betty with 5 children to care for. When Daphne’s paternal grandparents extended an invitation to come and live with them; her mother accepted the invitation. They grew up there with many happy memories; without excess but well cared for. While there something changed their lives in many ways. Daphne’s mother learned to love and appreciate the faith that her in-laws loved. When Daphne was about 20 years old, she chose this faith for herself and has kept true to that choice. Daphne chose to take a nursing program; another choice that brought her much enjoyment and a profession she would excel at. After graduating she worked for 3 ½ years in South Africa. She then moved to England where she worked at a London hospital in an operating room. She eventually became a nursing supervisor at this hospital. While in her earlier training she had read an article on international nursing. Someone asked her if she had ever thought of going to Canada. The thought of going to Canada stayed in her mind. In January 1962 she left Liverpool, England by boat for Canada, arrived in St John, NB and journeyed on to Toronto. There she continued her nursing profession at the Sick Children’s Hospital working and teaching pediatric nursing. During this time, she wrote an entrance examination for admission to the Public Health Nursing degree program at McGill University in Montreal. She received honors which afforded her a bursary for $1200 from the Ontario Government to complete her degree program, which she did. Following completion of this degree, Daphne worked in the public health field in Dryden, Ontario and Vermilion and Bonnyville, Alberta. The next step was for Daphne to go on and complete a master’s degree in Health Services Administration from the University of Alberta, Edmonton. Daphne’s thesis for this degree focused on ambulance care in Alberta. Daphne worked for 2 years for the Alberta provincial government making recommendations for improvements to the ambulance service. Following this she became the Director of Nursing at Norwood Continuing Care Centre and finally Director of Nursing at Allen Gray Hospital. Daphne leaves many relatives and friends in South Africa and Canada. She loved her visits back to her homeland and was eagerly anticipating a return trip scheduled for this week. She loved and appreciated the friends she met with at the Sunday and Wednesday fellowship gatherings. These were important highlights of her week. She had a living faith in God and in the Bible teachings. Special thanks go to her friends for their love and constant care for her. There were many trips for appointments and errands that her kind neighbor Adeline Neampu was the chauffeur for. Dr. John and Audrey Guthrie were a constant support; John was the ‘computer and technical support’. This support of kind friends enabled her to enjoy independent living at Heritage Tower these last few years. Daphne spent many hours of enjoyment knitting and cooking. She loved to find healthy recipes.Her kindness, and humour and loyal friendship will be missed. There will be an evening Memorial Service for Daphne this Friday, January 20th, 2023 at 7pm in the chapel at Hainstock's Funeral Home & Crematorium, 9810 34th Ave Edmonton, AB. All are welcome to attend.
See more See Less

In Memory Of Daphne Daniels