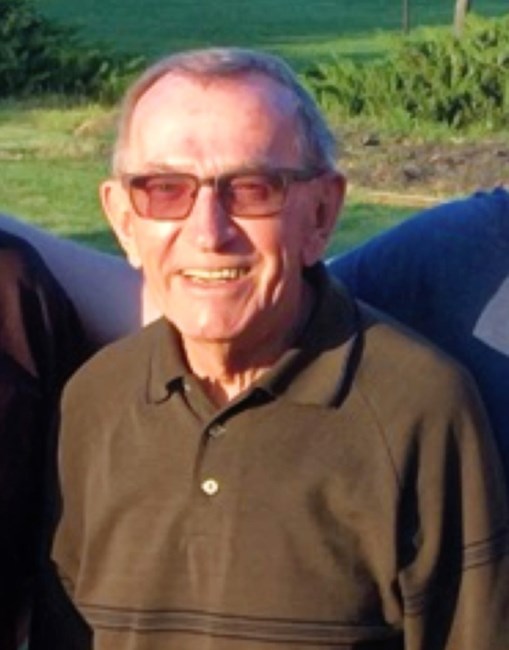 Leonard James Hanak passed away Tuesday, September 13, 2022. He was born in Edmonton, Alberta on February 9, 1936, and was the last surviving of 13 children of John and Katie Hanak. Leonard is survived by his wife of 62 years, Sylvia (Yurkowski); 2 children, Daryl (Carla Simulik) and Brenda (Darcy Daugela); 5 grandchildren, Eryn Hanak (David Best), Neil Hanak, Rhys Hanak, Janel Daugela (Justin McFadyen), Avery Daugela (Mike Savage); and 2 great grandchildren, Lochlan McFadyen and Estelle Rose Best. Leonard graduated from St. Joseph High School in Edmonton. He obtained his B.Ed. from the University of Alberta in 1959. He began his teaching career in Cluny, Alberta in 1959, and returned to Edmonton in 1961 when he joined the teaching staff at Edmonton Catholic Schools. With ECS, Leonard served as a teacher and administrator for 30 years, first at St. Joseph High School, where he taught sciences and maths, and later at the Central Office as Assistant Superintendent, Area Superintendent, and Superintendent of Program Services. Leonard retired in 1992. A memorial service will be held for Leonard at Memories Funeral Home, 13403 St Albert Trail, Edmonton, AB T5L 4X1 on Tuesday, September 27, 2022 at 11:00am, followed by a light lunch. A private interment will take place at a later date. Fond memories and expressions of sympathy may be shared at www.memoriesfuneral.com for the Hanak family.
See more See Less

In Memory Of Leonard James Hanak