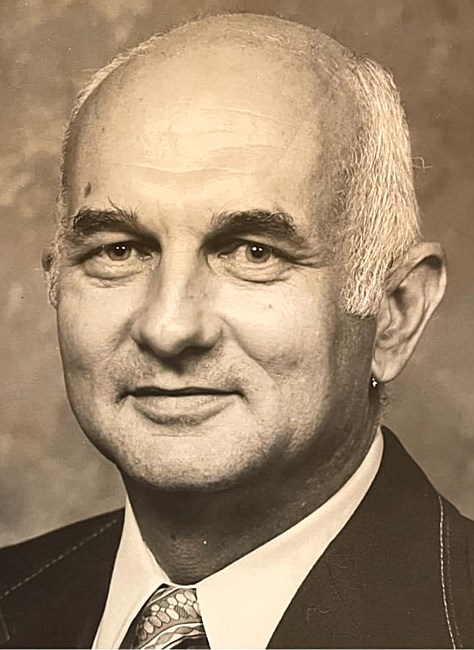 Walter Austin Bollen, Jr. was born on March 29, 1928 in Collinswood, Tennessee to Walter Austin Sr. and May Wilson Bollen. With his parent’s career in education, he lived across the south and graduated from Magazine High School in 1944. At the age of 16 he attended the University of Arkansas where he completed his engineering degree in record setting time, 3 years. While at the U of A, he was the Saint Patrick’s Day Engineering Beau. From the moment he met June Rose, he was smitten. So smitten that he would chase her around her desk at work to flirt. On March 17, 1950, they married in Magnolia, Arkansas at Central Baptist Church. On earth they celebrated 66 years of marriage and he rarely ever told June “no”. She would say that is what made their marriage work. Unable to have children, they were gifted two children through adoption. In 1956, they welcomed their son Hagen and in 1961, they brought home a daughter, Rebecca. Their two children brought immense joy and fulfillment in their lives. Austin and June believed in the power of prayer. Through their prayers they were not only able to adopt two children but were blessed with five grandchildren and eight great-grandchildren. Austin had a love of sailboats and spent time sailing in various lakes and oceans. He enjoyed traveling the world with June and friends. They were blessed with incredible, lifelong friendships. He was a committed Razorback fan and watched every sports team they had even searching the radio dial so he could listen to the game. He was an avid reader and big fan of John Grisham. He never met a project he couldn’t fix and had more tools than he ever needed. His toolbox still sits in his trunk right now. In 1947, he began his career in engineering (something that he was very proud of) at Arkansas Power and Light Company (now Entergy) in Searcy, Arkansas. During this time, he also proudly served in the U.S. Air Force. In 1956, he became a Senior Engineer Designer at Dow Chemical Company where he designed electrical facilities for large chemical complexes. Beginning in 1959, he transferred to Monsanto Company in El Dorado, Arkansas where he worked for three years in various roles including Supervisor and technical support. In 1968, he moved to Morris, Illinois where he helped with a massive plant start up including construction, staffing and management. After 10 years, he and his family returned to El Dorado to work as Director of Natural Resources at Great Lakes Chemical Company (now Lanxess). His biggest adventure in his career began in January 1980 and continued until his passing when he started his own company, IPSE. He worked to design new electrical systems, served as an expert witness, investigated insurance claims, designed and installed control systems plus taught electrical courses. He was one of the hardest working men who truly loved his career. Austin believed in serving others. He demonstrated this as he served as Deacon at FBC Morris and Second Baptist in El Dorado. He frequently participated in church committees, often as the Chair. He served his community as a member of the Morris Zoning Committee and Civitan. Austin loved teaching the word of God in Sunday School. His favorite class was the young couples. He and June enjoyed serving as encouragers to young couples starting out. His last volunteer endeavor involved completing tax returns for many in the community working with Dara. He did this until Spring 2022. He leaves behind a legacy of children, grandchildren and great-grandchildren. Missing him are his children, Hagen Bollen and Dr. Becky Parnell (Joe); grandchildren, Josh Willeford (Hillary), Katie Farrin (Rusty) and Helen Armstrong; eight great-grandchildren, Savannah, Payton, Nate and Sadie Rose Willeford, Reynolds Carter, Skip, Clara June and Walter Farrin. Austin is proceeded in death and welcomed with open arms by his wife, June Rose; mother; father; brother, Edmond Bollen (Nancy); sister-in-law, VonCeylle Cragan (Cecil); brother-in-law, Leon Hagen (Carlie) and many friends. We are also thankful for the care and love shown to Austin by his caregiver Diane Lovette, the Medical Center of South Arkansas, Lifetouch Hospice House and Dr. Greg Smart. While we are devastated by his passing, we are overflowing with gratitude for his life. He taught us to live by serving others with our gifts and to cherish each moment with family. We miss him but know he is reunited with family, his beautiful wife and worshipping the Lord with the angels in heaven. Visitation will be held from 6:00 – 8:00 p.m. Friday, August 5, 2022, at Young's. Funeral services will be 10:00 a.m. Saturday, August 6, 2022, at Young's Chapel with Chester Passmore and Dr. Michael Seabaugh officiating. Burial will follow at Arlington Memorial Park under the direction of Young's Funeral Directors. In lieu of flowers, the family request that memorials be made to Camp Haven (www.camp-haven.com), CrossLife Church (crosslifechurcheldo.com), Central Baptist Church (www.cbcmagnolia.org/), or Life Touch Hospice (lifetouchhospice.org). Pall bearers: Josh Willeford, Rusty Farrin, Payton Willeford, Reynolds Carter, Terry Mouser, and Randy Swilley. Honorary pallbearers: Frank McKinney, Walt Mayden, and Byron Thomasson.
See more See Less

In Memory Of Walter Bollen