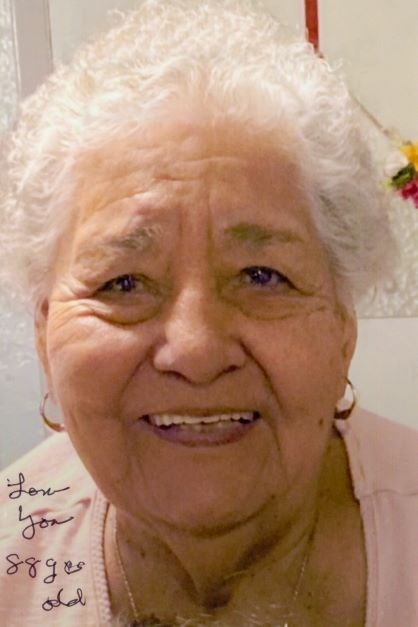 Our beloved mother Cecilia E. Herrera, 88, went home to Jesus surrounded by her family on Tuesday January 17, 2023. Cecilia was born to Luz and Jacoba P. Estrada (+) on October 18, 1934 in San Elizario, Texas. She was the oldest daughter. She is survived by 4 siblings, Beatriz Solis, Marta Estrada, Luz Estrada and Berta Ramirez and predeceased by her sister Eliza Valenzuela (+). She met the love of her life Raul Herrera(+) while being placed as partners during the wedding of her long life friend Mary Paz. She then married Raul Herrera (+) on October 23, 1955. She is predeceased in death by her husband of 39 years Raul Herrera Sr. (+) and her daughter Aurora Herrera(+), her parents Luz and Jacoba Estrada and sister Eliza Valenzuela. She is survived by her children Raul Herrera Jr., Anita Herrera Luna & spouse Juan Luna, Ida Marie Herrera, Danny Herrera and spouse Elinora Herrera and Grace Herrera. She was a devoted and loving grandmother to 11 grandchildren and 13 great grandchildren and sister in law Alicia Mendoza. She also had numerous nieces, nephews God children and life long friends that she leaves behind. She was an active member of La Purisima Catholic church. She graduated from Ysleta High School. First and foremost Cecilia was a dedicated wife and mother. Her first job was with Farah and also worked as a Nurses Aide for the Socorro Independent School District for 8 years. Along with her husband they owned Casa Herrera Restaurant. With the assistance of the Liones de Cd. Juarez she opened her home to prepare 11 annual Christmas meals hundreds of orphans from Juarez Escuela Para Ceigos de Cuidad Juarez.. Children were transported to her home by chartered buses. Together with her husband Raul they would help out in the community where there was a need. Her most favorite past time after retiring was preparing large meals for her family to enjoy, making homemade tortillas and tamales for Christmas. She loved to crochet alongside with her daughter Ida. As she crocheted she’d be continuously praying. Being taken to the casino was her favorite adventure. She enjoyed going shopping at Ross, reading and praying her rosary. She treasured her grandchildren and greatgrand children and treasured every moment she had with them. She enjoyed seeing how her sons or grandchildren would tease each other as to who her #1 favorite son or grandchild was. She always stayed in contact with her dear friends Mary Paz, Carmen Gourgouraskis, and Adela Dominguez. Rosary services will be January 30, 2023 at San Elizario Catholic Church from 4:00 p.m. to 8:00 p.m. Rosary will commence at 6:00 p.m. Funeral Mass will be on January 31, 2023 at La Purisima Mission at 10:00 a.m. She will be laid to rest at La Purisima cemetery in Socorro Texas. Pallbearers; Danny Herrera, Ray Adam Martinez, Michael Jay Herrera, Jon Jacob Luna, Matthew Lawrence Martinez, Julius Ortiz. Honorary Pallbearers: Luz Estrada, Eric Ramirez John David Ramirez and Nicholas Herrera III. During the mass we will be taking a special donation for La Purisma Catholic Church. Fond memories and expressions of sympathy may be shared at www.crestviewfuneralhome.com for the Herrera family.
See more See Less

In Memory Of Cecilia E Herrera