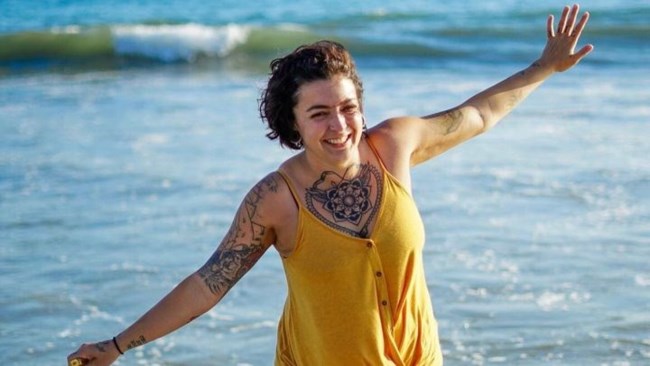 Samantha Autumn Angel Martinez (known to most as “Sam”; known as “Autumn” when she wanted to be extra fancy), unexpectedly passed away in the safety and comfort of her mom’s apartment on the morning of January 15, 2022. She was in the steadfast and loyal presence of her beloved dog, Kevin (who Sam would want you to know is a girl,) and her cat Clementine. She was 32 years old. Born on September 30, 1989 (a true Libra) in El Paso, TX, she was both her parents’ youngest child– her mother’s second, her father’s third. She attended St. Raphael’s School through 6th grade, Eastwood Middle School, and graduated from Eastwood High School in 2007. She played trumpet in both marching and concert seasons with the Trooper Band. After high school, Sam and her mom departed on an adventure together, relocating from El Paso to San Diego, CA, where they lived Downtown, in Point Loma, Ocean Beach, and Chula Vista over a number of years– and where Sam is also known to have jumped into the ocean from the Sunset Cliffs. She put roots down there, making close friends who she cherished even after she relocated back to El Paso in 2014. She attended cosmetology school in El Paso, proudly earning her certification in 2016. Sam was most recently a hair stylist at Studio A, in El Paso. Known as “Auntie Bean” to her 3-year-old niece– who Sam Called “Lil’ Bug”-- she was beloved and admired for her earrings and tattoos, for appearing out of nowhere on her bicycle, and for her attentiveness. Sam was looking forward to soon giving the Lil’ Bug her first haircut. Sam displayed her beautifully bold and bohemian sense of style in her piercings, the colorful tattoos she sported all over her body, and in any space she curated, organized, worked, or lived in. Some of her favorite emblems were mushrooms, sunflowers, and anchors. In the last few years of her life, she became more engaged in current events, cast a ballot for the first time, acquired a street bike she was learning to maintain herself, and loved every minute of MCU movies and shows. Charismatic, friendly, and outgoing, Sam accumulated a mass of friends throughout her life. Her close friends especially she considered family; she valued her time in their company, accepted the distance that sometimes developed over time, and picked their close confidence and company up again with so much joy whenever the opportunity allowed. Sam’s spirit now joins those of her father, Samuel Martinez (‘93); her grandma, Rosa Martinez (‘06); and her grandpa, Gregorio Martinez (‘06) in the Great Beyond/ Heaven/ Valhalla/ Eternity. Left to miss her terribly on the mortal plane are her mother (“Mum”), Janette Martinez; her sister, Kristy Martinez; her sister, Angela Lucero (née Martinez), and brother-in-law, Jesse Lucero; her niece, Elodie Lucero; her grandmother (“Nana”) Daphne Bierman; and dear aunts, uncles, and cousins. A visitation will be held on Friday, 1/28/22 from 4pm-7pm at Martin Funeral Home East at 1460 George Dieter in El Paso, (with remarks and remembrances from 5pm-7pm) open to anyone who wants to celebrate Sam’s memory, and listen to her jams. Sam’s earthly remains will be interred at Mt. Carmel cemetery on 1/29/22 at 930am. (Pallbearers: Kristy Martinez, Jesse Lucero, Joseph Martinez, D.J. Hinchman, Aaron Mireles, and Rick Fernandes.)
See more See Less