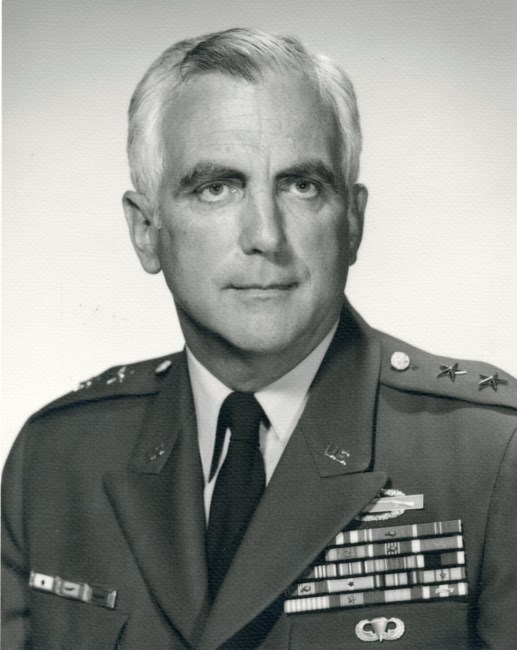 William Lade Mundie (Maj. Gen., USA Ret.) died on February 22, 2019 at the age of 91. He is survived by his wife of almost 70 years, Virginia Anne, his three sons; William Jr. (Kathleen), Michael (Dianne), and John (Lilia,dec.); his brother, James A.(Sara); grandchildren William III, Ryan, John, Michael, Meghan Harden, Thomas, Peter, Jamie, Jennifer, Liseli Pennings, and Alani Rondon; and twenty five great grandchildren. The eleven grandchildren will always hold dear the stories of the life of their beloved “Two Pop.” Only they could get the old soldier to act like a kid. Bill was born in Kansas City, MO., and raised on a farm in Overland Park, KS. during most of the Great Depression. His family moved to Dallas in 1937 and there he met the love of his life. He graduated from Highland Park High School in 1944 and enlisted in the Army. He graduated from Officer Candidate School in 1946. In September, 1950 1st Lt. Mundie was in command of Company G, 38th Infantry Regiment, 2nd Infantry Division, in northwestern North Korea when the Chinese came across the Yalu. As part of the rearguard for the Division withdrawal, he learned what it meant in combat to be in charge of “turning out the lights.” Only sixty- seven soldiers and eleven officers of his battalion survived running “the gauntlet.” In January 1951 he was wounded near Wanju, South Korea and survived only because four “buddies” came to retrieve him. For the rest of his career and for the rest of his life, every day after Korea was a gift. He served in South Vietnam in 1964-65, and again in 1967-68 when he took command of the 1st Battalion, 35th Infantry at Firebase Mile High in the Central Highlands, just in time for the1968 Tet Offensive. Different wars, different homecomings. Bill was awarded the Silver Star, Bronze Star 2nd OLC, Purple Heart, and the Korea and Vietnam service medals. After 35 years in the Army, with stints in post-war Japan, Turkey, and all over these United States Bill and Virginia settled in El Paso in 1979 to enjoy the many superlatives of this well kept secret part of the world. He taught math at Radford School and helped right the ship at Prepared Foods in Santa Teresa before retiring for good. Motor-homing and second- homing in Cloudcroft rounded out their golden years. Bill was a soldier’s officer. In his reminiscences he offered these observations. Protecting your buddy is the most basic and courageous act of soldiering and many courageous men died so their buddies could live. Soldiers will fight and go through hell for leaders who truly care about them. Leadership and command are not the same; a leader is as soldier oriented as he is mission oriented, command is an assignment which hopefully goes to men who are leaders first. Too many men forget that loyalty is a two- way street and key to that is protecting your soldiers from the often inane and counterproductive demands of your superiors. The Mundie family thanks the following El Paso physicians for keeping the old soldier patched together, Anita Larson, M.D. (dec.); Suresh Antony, M.D.; Michael Bagg, M.D.; Juan Escobar, M.D; Hector Maldonado, M. D.; and Jose Calderon, D.O. And a special thanks to Roberto Masferrar, M.D. of Colorado Springs for a new neurosurgical lease on life.
See more See Less

In Memory Of William L. Mundie