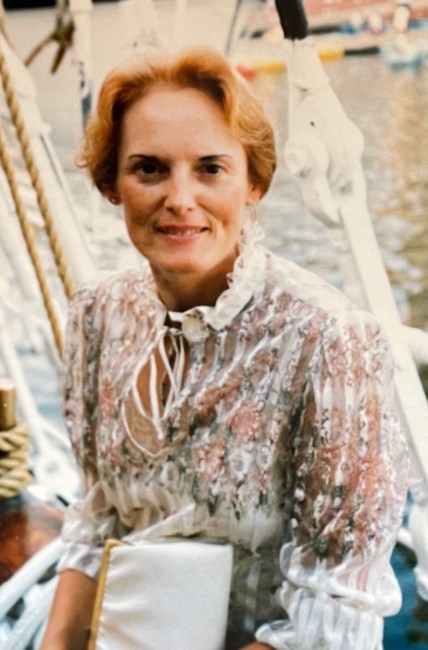 Kathleen MacAloney Blackwell, née Mary Kathleen MacAloney, born June 21, 1932, in Cornwall-on-Hudson, New York, died peacefully in her home in Catonsville, Maryland, on January 18, 2023, surrounded by her family. She is survived by her husband of 68 years, James Dayton Blackwell, sons John Turner Blackwell and Mark Dayton Blackwell, daughters Kathleen Louise Blackwell Bird [Ronald] and Vickere Lee Blackwell Murphy [Neil], her grandchildren Rachel Cameron Murphy, Gemma Kate Murphy, Andrew John Ronald Bird [Caitlin], Maria Antonia Elizabeth Bird [Justin Wood] and William Matthew James Bird, and her great-grandson Daniel John Andrew Bird. Kathleen was a devoted wife and mother and created a home filled with music, song, and laughter. She was a lifelong student who loved learning. In addition to her bachelor’s degree in Music Education, she had a bachelor’s degree in Ancient Studies (Latin and Ancient Greek) and a masters’ degree in Educational Counseling. Kathleen met her husband Jim, both 19 years of age, in an opera class at the University of Maryland, College Park, where they were music majors. She was a member of the Kappa Delta sorority. They were married two days after graduating college, in Cornwall-on-Hudson, New York. Kathleen had grown up in Cornwall, spending every summer at her grandmother’s house overlooking the Hudson River while her father was doing field work as an entomologist with the US Forest Service. In addition to being a musician, Kathleen was a student of language and considered also obtaining a masters’ degree focused on English grammar. She loved non-English languages, too, and had a good ear for them, something she passed along to her children and grandchildren. In addition to Greek and Latin, she studied French, German, Russian, Italian, Polish, and most recently Hebrew. Kathleen supported her husband Jim’s school choirs, first at Catonsville Junior High School, then at Woodlawn High School. For many years, she sang in her husband’s church choir at Catonsville United Methodist Church, where she also directed the children’s choir and the handbell choir, which she founded. But the church was not her spiritual home. She loved the ritual and intellectual curiosity of Judaism and felt at home in the Synagogue, leading her to study for her Bat Mitzvah in 1990 and to sing in the choir at Beth El Congregation. Kathleen also taught piano lessons and gave voice instruction to several area singers. She could sightread anything and was still able to play four-hand duets by sight and sing songs even after she had lost her ability to speak. Two of Kathleen’s children lived many years on sailboats. She and her husband visited their children on their tiny boats and sailed up the Inland Waterway and cruised in British Columbia, San Juan Islands, Mexico, and New Zealand. Kathleen loved visitors, particularly those from other countries. She encouraged her family to host an exchange student from Denmark and she opened her door to a young Polish girl who needed a place to live while she recovered from surgery at Johns Hopkins Hospital. These visitors became lifelong family friends. Trips to Europe with UMBC’s Ancient Studies or with Elderhostel took Kathleen and her husband Jim to Greece, Spain, France, Italy, Netherlands, England, Ireland, Denmark and Germany, where one of her daughters lives. Kathleen’s family nickname from early childhood was “Honey” because she was so sweet-natured. Nicknamed “Kay” by a high school friend, she went by that name with friends until later in life when she reclaimed “Kathleen” as her preferred name. Kathleen was always fiercely independent and rarely, if ever, complained or asked for help. Kathleen would want to be remembered for being curious, adventurous, cheerful, funny, encouraging, supportive, engaged, and thoughtful. Receiving of Family & Friends for Kathleen will be held Friday, January 27, 2023 from 12:00 PM to 1:00 PM at the Gary L. Kaufman Funeral Home at Meadowridge Memorial Park, 7250 Washington Blvd, Elkridge, MD 21075, where a Memorial Service will follow at 1:00 PM. Inurnment Meadowridge Memorial Park. Memorial Services will be live-streamed via Facebook under Gary L. Kaufman Funeral Home at Meadowridge Memorial Park. Fond memories and expressions of sympathy may be shared at www.garylkaufmanfuneralhome.com for the Blackwell family.
See more See Less

In Memory Of Kathleen MacAloney Blackwell