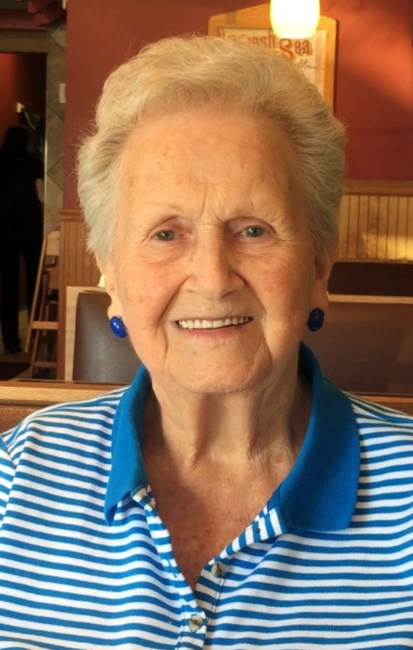 Our beloved mother, grandmother, great-grandmother, sister, aunt, and friend to anyone she ever met, Shirley Alice Crook, nee Baumgartner, passed away peacefully on May 10th, 2022 surrounded by her family. Shirley, affectionately known to many as Teeny, was born January 31st, 1927 to Henry Andrew and Loris, née Hyland, Baumgartner in Baltimore, MD. She was the 3rd oldest of the couples six children. She grew up in the Baltimore area moving from Amberley Road to Parksley Ave and then to Benson Ave. She grew up with her 5 brothers and sisters, her grand-father August Baumgartner (until his death in 1947), her grand-mother Laura Baumgartner, née Degraff, (until her death in 1933), her mother Loris and her beloved father Henry, a fireman for the railroad who passed early in 1944 when she was 17. On January 18th, 1947 she married Joseph Aloysius Crook of Avalon, Maryland. They raised their family of three on Main Street in Relay, MD and then moved to Francis Ave in Halethorpe. The oldest of the three Shirley Ann Rathburn, née Crook was born to the newlyweds in 1948. Joseph Crook, Jr. followed in 1950 and in October of 1951, Dorothy (Jean) Anderson, née Crook, was born. Shirley babysat the neighborhood children while her children were growing up. She loved dressing them up and taking their picture. The love of taking pictures followed throughout her life and she always had a new photo to show. Shirley was a loving mother, always putting her children first in her life. She was the first to make any sacrifice needed to give her children whatever they needed. Her selfless and unconditional love shows through the generations that followed and you would almost never see her without one of her children, grand-children, or great-grandchildren by her side. She believed in family first and counted her close knit family as one of her greatest accomplishments. She was always the center of every holiday celebration and had an incredible ability to make everyone think they were her favorite. Beyond childcare and being an amazing home maker, Shirley also worked at Proctor Silex as a welder, Calvert Distillery as a bottler, and (her favorite job) a candy maker at the world famous Rheb’s Candy of Baltimore. The I Love Lucy episode of her working on the candy line probably is a great representation of why she loved that job… her sweet tooth and love of anything sweet was a big driver in the gifts she received. Most often it was a box of Rheb’s Truffles that she somehow made last by hiding them in the freezer! Shirley led a life full of love and laughter. She always thought that raising her children was the highlight of her life… until 1976 when the grandchildren started! Each of the 4 spent a large part of their first years with Mom-Mom. She loved to spoil them rotten holding them, rocking them, baths in the kitchen sink, painting the house with a brush and a bowl of water, dress-up, cartoons, her famous cinnamon toast, and always somehow having a warm towel right out of the dryer after a bath! She spent countless hours teaching them to play 500 Rummy and playing to 500 time and time again. Again, thinking that the grandchildren were the best part of life, in 2001 she realized that the only thing better than grand-children are great grand-children. She loved holding the babies and was often thought of as the baby whisperer! The warm towels, cinnamon toast and spoiling them rotten continued through another generation. She even taught them to play cards as well – there may have even been some poker lessons! Shirley was diagnosed with Dementia in the latter part of her life. Even when she wasn’t sure of our names, she knew she loved us and always smiled that Mom-Mom smile. Her heart was full of love until the very last of her days – as well as her love of sweets! Shirley is survived by her daughter, Shirley Ann Rathburn, nee Crook, of Idaho; her son Joseph Crook Jr. and his wife Gail recently of Florida; and her daughter Jeannie Anderson, née Crook, and her husband Ron of Glen Burnie, MD. She will also be missed greatly by her beloved grandchildren Jaime Shewbridge, née Anderson, & her fiancé Patrick Beever Jr. of Glen Burnie; Natalie Bush, née Crook, and her husband Jason of Florida; Ryan Anderson and his wife Erin of Barclay, MD; and Joseph Crook III of Montana. Shirley’s love transcends to a 4th generation of great grandchildren that will forever be better for having her in their life. Jaime and Patrick’s children: Caite, Shelby, and Lexi Shewbridge & Allison, Carlye, and Brieanna Beever; Natalie and Jason’s children: Brendan and Jacoby Bush; and Ryan and Erin’s children: Ethan and Bryce. She is also survived by her youngest brother, Maurice A. Baumgartner (born 1932) of Baltimore. She is preceded in death by her husband of over 45 years, Joseph Crook Sr. (1922-1994); her son-in-law Wayne Rathburn (1943-2021); her brother Harry Robert Baumgartner (1924-2004); her sister Margaret Laura Albrecht, Née Baumgartner, (1926-1997); her brother Leroy Joseph Baumgartner (1928-1993); her sister Dorothy M. Roloff, Née Baumgartner, (1929-2010); and her beloved dogs Queenie & Baby Girl. Family and friends are invited to gather at Gary L. Kaufman Funeral Home at Meadowridge Memorial Park, Inc. 7250 Washington Blvd., Elkridge, Maryland 21075 (Exit 6 South off Route 100) on Friday, May 20, 2022 from 3:00 - 5:00pm and 7:00 - 9:00pm. Mass of Christian Burial will be celebrated at St. Augustine Catholic Church 5976 Old Washington Road, Elkridge, Maryland 21075 on Saturday, May 21, 2022 at 10am. Interment St. Augustine Catholic Church Cemetery. Those wishing to send floral tributes, please visit www.flowersandfancies.com Fond memories and expressions of sympathy may be shared at www.garylkaufmanfuneralhome.com for the Crook family.
See more See Less

In Memory Of Shirley Alice Crook